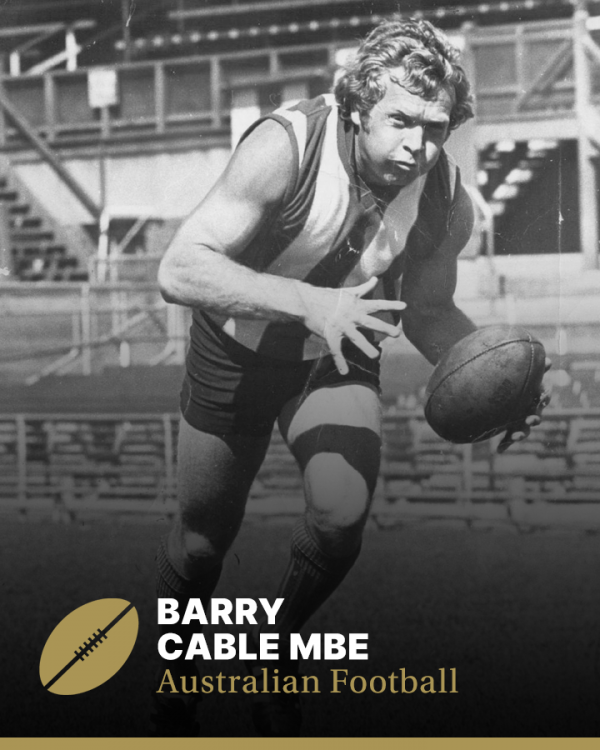 Barry Cable MBE was inducted into the Sport Australia Hall of Fame in 1986 as an Athlete Member for his contribution to the sport of Australian football.

Barry Cable was one of Australia’s greatest rovers. He excelled in Western Australia, winning three Sandover Medals as best and fairest in the Western Australian Football League, and was a dominating player in the Victorian Football League with North Melbourne in the most successful years in the club’s history. He was a skilful left-foot rover, with exceptional disposal and was known for his pinpoint handballing.

From the moment he first played senior football with Perth in 1962, the small and nimble Cable showed that he was a natural. He was able to adjust his style to suit wet and dry conditions, and was always a rugged but fair competitor.

Cable won the Sandover medal three times, 1964 and 1968 (before he was persuaded to play in Melbourne) and again in 1973 after his return to WA. In 1966 he won the Tassie Medal as best player in the Australian National Football Championships.

Cable finally weakened after a barrage of offers to play in the VFL when he signed to play with North Melbourne in 1970 for one season. He dominated for North and won the club’s best and fairest award, the Syd Barker Medal, but returned to Perth the following year and continued as a rover.

In 1974, following re-organisation of North and the appointment of Ron Barassi as coach, Cable returned to the VFL and helped the club to make its first appearance in a grand final in 25 years. North was beaten by Richmond but in the following four years, North made the grand final giving Cable the distinction of playing in five consecutive grand final matches from 1974 to 1977 (including the 1977 replay with Collinwood). The first grand final match of 1977 was drawn with 76 points each but North won the replay by 27 points. This was the second time in history that the grand final has had to be replayed (the first being in 1948 between Essendon and Melbourne with Melbourne winning the replay). Cable remained with North until the end of 1977 and had played a total of 116 VFL matches.

On his return to the West he was made captain-coach of East Perth. On August 11, 1979, he capped a magnificent career by playing his 400th senior league game of Australian football. He later coached North Melbourne from 1981 to 1984.