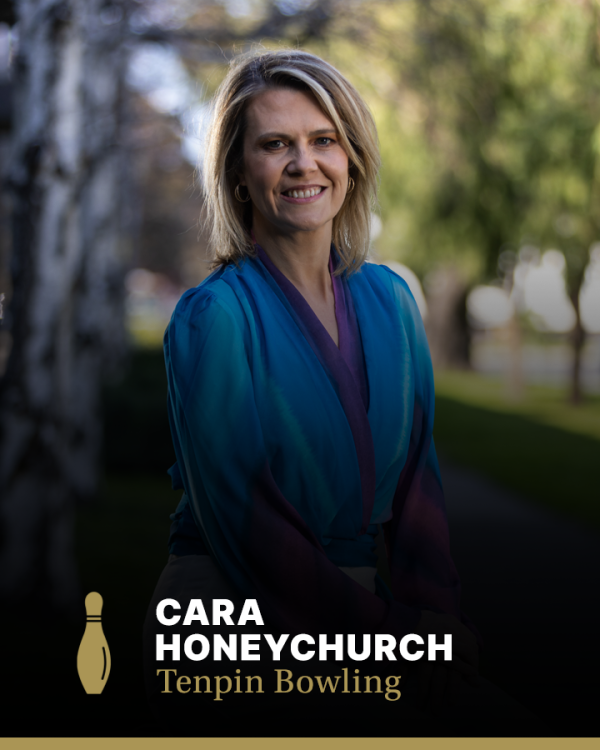 Cara Honeychurch was inducted into the Sport Australia Hall of Fame in 2022 as an Athlete Member for her contribution to the sport of tenpin bowling.

One of Australia’s most successful tenpin bowlers, Cara Honeychurch fulfilled her childhood ambition of becoming a world champion and helped to elevate her sport into the mainstream.

The graceful left-hander brought a mix of composure, accuracy, deft touch and controlled speed to tenpin bowling in a career highlighted by her national representation.

Honeychurch was the second Australian to win a world bowling championship – in Northern Ireland in 1996.

She was also one of this country’s unlikely heroes at the 1998 Commonwealth Games in Kuala Lumpur, Malaysia, becoming a triple gold medallist from her three events.

She turned professional and was named rookie of the year in the Professional Women’s Bowling Association in the United States in 2000. She would go on to win eight titles as one of the most successful players on tour across three years.

Cara Honeychurch boldly informed her parents when she was seven that she wanted to be a world champion – she just didn’t know which sport would be the platform for her success.

But a family holiday to Canberra three years later provided her with a clearer picture. Her parents took her out for a night of fun at the Olympic Bowl in the nation’s capital and it was the catalyst for her pathway into the sport of tenpin bowling.

On her return to Melbourne, she had her first night at the Keon Park bowling centre where she scored only 34. But she became transfixed by the magic of her new sport.

It wasn’t long before she began making junior representative teams and starting to shoot for the stars, donning the green and gold on nine occasions.

She finished third in the Bowling World Cup in 1994, but her return to that event two years later saw her become only the second Australian to win, following Jeanette Baker (1982 and 1983). Honeychurch was name Asian Bowler of the Year in 1994 and 1995.

Honeychurch’s 1996 World Cup success in Northern Ireland fulfilled her childhood dream as she beat competitors from 54 countries to become the women’s world champion. In that same year she was named the Bowler of the Year by the World Bowling Writers, an award she would also win in 1998.

At the height of her bowling career, she was inducted into the International Bowling Hall of Fame, in 1998.

The fiercely-determined, composed left-hander took great pride in representing her country, with her participation in the 1998 Commonwealth Games in Kuala Lumpur, Malaysia, proving one of the highlights of her career.

A quiet, modest achiever, Honeychurch was thrust into the spotlight as one of the drawcards of the Games in a country where tenpin bowling ranked as one of the high-profile sports.

Malaysia’s tenpin bowling coach launched ‘Operation Cara’, encouraging the local crowds to whistle, cheer and jeer ‘The Ice Maiden’ – as they dubbed her – in an effort to put her off her game.

It never worked; it only steeled her resolve.

Honeychurch would go on to win three Commonwealth Games gold medals – women’s singles, women’s doubles and mixed doubles events – with the final of those victories coming in front of the queen of Malaysia and bringing a wild reaction from her Australian teammates.

She was feted alongside the heroes of the pool and the track, a rare acclamation for tenpin bowling alongside some of the more mainstream sports.

“It was one of the greatest lessons not only in sport but in life, in sticking to the process, staying in the moment and the realisation that you are in control of your emotions and how you respond to situations,” Honeychurch would later say about her triumph under pressure in Kuala Lumpur.

Honeychurch turned professional before the 1999 world championships, moving to the United States to compete in the Professional Women’s Bowling Association tour.

In three years on the PWBA tour, she was adjudged Rookie of the Year award (2000), won eight titles, finished runner-up in the Player of the Year award and won $US 50,000 in a televised 300-game to further frank her success on the world stage.

Honeychurch won nine Open Major Championships from (1997 – 2003) including winning the Australian Open three years in a row (2001-2003) in her career, this feat unique as being one of the only women in the history of the sport in Australia to have consistently beaten the men. Since she retired women in tenpin bowling still compete again men but receive a nine pin per game handicap.

Honeychurch returned home to Australia when the PWBA ceased operations for a period at the end of the 2003 season, but her commitment to the sport remained undiminished.

She would go on to serve as the chief executive of Tenpin Bowling Australia for more than a decade.