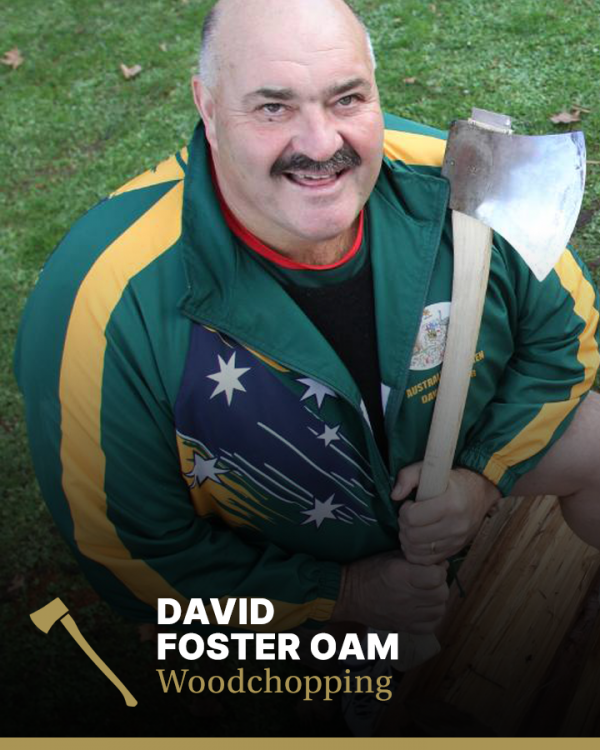 David Foster was inducted into the Sport Australia Hall of Fame on Friday, December 4, 2020 as an Athlete Member for his contribution to the sport of woodchopping.

David Foster is widely regarded as the greatest axeman Australia has ever seen and, with a staggering 186 world titles over 21 years in woodchopping, probably the world’s best. David competed and won at every major event in Australia and New Zealand at least once in his career, including the Wimbledon of woodchopping, the Royal Sydney Show. David’s winning ways continued outside of Australia and New Zealand, competing in America where he broke three world records. David owns many world records, across multiple categories and wood types.

Foster was regarded as certainly the greatest axeman Australia had ever seen and probably the world’s best-ever.

The Tasmanian strongman won 186 world titles and 176 nationally, and in 1998 won his 1000th title at various levels – believed to be the only athlete in any sport world-wide to achieve such a milestone. He later increased that to more than 1800.

Foster broke numerous world records across multiple categories and wood types, captained the Australian woodchopping team for 21 years and was named Australian axeman of the year nine times in a row and axeman of the decade in 1990.

There was no major event in Australia or New Zealand that Foster had not won at least once, including the Wimbledon of woodchopping, Royal Sydney Show, where he won 60 world championships. Foster continued his winning streak outside of Australia and New Zealand when he began competing against the Americans, he broke three of their world records.

David was named Tasmanian of the Year in 1995, awarded an Order of Australia Medal in 1991 in recognition of service to the sport of woodchopping and various other accolades for community service.