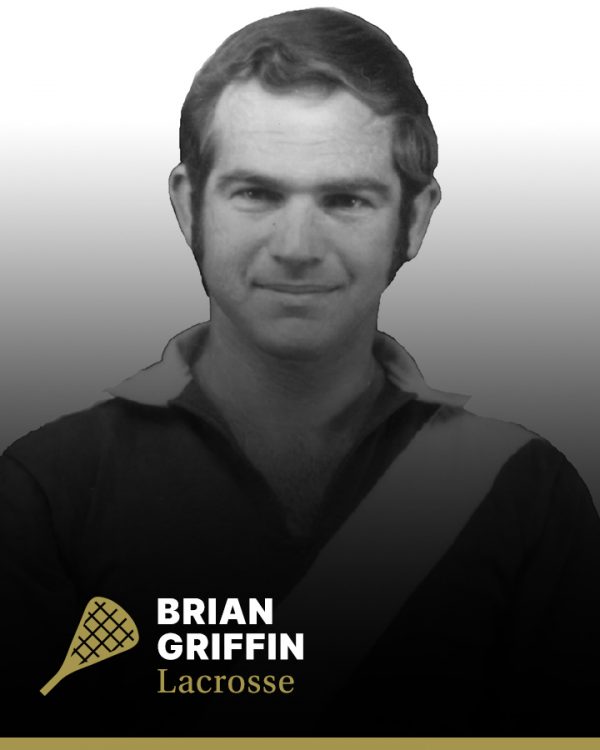 In 30 years of senior Lacrosse, Brian Griffin gave long and distinguished service to the sport at international, national and state level. His style of play revolutionised the game and he is recognised as one of the best players ever. As an attacker of the highest quality, he first represented Australia in 1962 and subsequently played in two World Series. He represented Western Australia and Australia more times than any other player, appearing in more than 500 matches and scoring more than 3000 goals.

Griffin’s first taste of lacrosse was at Perth Boys’ High School in 1953 when a teacher, who played for Subiaco Lacrosse Club, invited students to see the game. Already familiar with the sport from watching his two uncles play, Griffin joined Subiaco and began a lifetime involvement with the club.

Griffin’s career commenced the following year at age 13 in the Under 15 division and played his first game of seniors A grade in 1956 aged 15, whilst also playing in the Under 15 premiership side. In 1958, he played for the WA Under 21 side and was the leading goal scorer, the start of a 22-year reign at the top of the local sporting list. He continued to play A grade until 1960 and established himself as an offensive threat by scoring in excess of 100 goals for three consecutive years.

In 1960 Griffin was transferred to Melbourne by his work where he commenced playing for the Caulfield Lacrosse Club. During his three year stay from 1960 to 1962, they won the premiership and he led the league in scoring each year. He returned to Perth in 1963 where he was appointed the captain/coach of the Nedlands-Subiaco team. This saw the commencement of Nedlands-Subiaco’s premiership run from 1963 to 1969. After a two year lay off as coach, he returned to the game as player/coach and lead the club to another premiership in 1972. He continued to play at A grade level until 1979, then went into a brief retirement from top level lacrosse. He continued playing for the club in its Division 2 and 3 grades, helping up and coming junior players develop through the ranks.

In 1982, he made a brief comeback to top level lacrosse to represent WA in the national championships, aged 41. WA won the championships, he was leading goal scorer for the tournament, was chosen in the All Australian team, and was voted runner up best and fairest player for the championships. He was again selected to the WA state team the following year aged 42.

Griffin’s international career is also exceptional. At 21, he was part of the first-ever Australian side to tour the USA, Canada, and England in 1962.

In 1967 he captained the Australian side at the World Championship in Toronto, Canada, and was selected as the most valuable player for the tournament. Being able to throw and catch with both hands was unheard of until then and he also developed a back-hand shot which made for greater depth in play. American experts described Griffin as the best player in the world and he was recognised by the US Lacrosse Hall of Fame, Baltimore, in 1972.

In 1970 he was a member of the Australian team to play against the touring USA team and in 1972, toured the USA again. In 1974, he competed in the World Series in Melbourne and in 1984, was assistant Australian coach for the World Games.

He was very active throughout his career in the area of junior development and was instrumental in introducing the clubs under 10 and 12 junior development program in 1965, which he then coached for over 10 years. In 1982 he commenced the inaugural U 14 national junior competition and was the coach of the Western Australia team in 1999. He was involved with the 2002 Australian team in the World Championship.

In 1982, Griffin introduced a modified version of lacrosse called Sofcrosse, into schools throughout Australia, which was adopted as part of the Aussie Sports program for junior sporting development. In 1986 he was inducted into the Western Australian Hall of Champions.