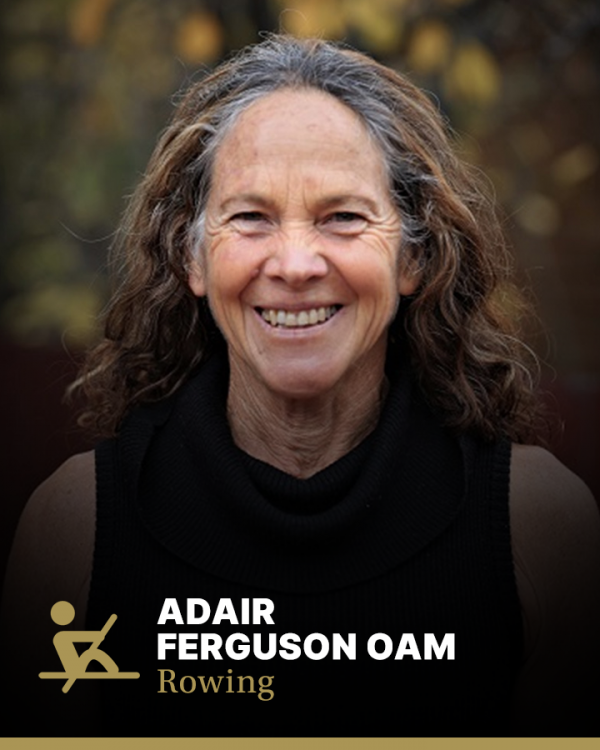 Adair Ferguson OAM was inducted into the Sport Australia Hall of Fame in 1986 as an Athlete Member for her contribution to the sport of rowing.

When Adair Ferguson won the single sculls title at the 1985 rowing World Championships in Belgium, she became Australia’s first female world champion rower. Ferguson proved it wasn’t a fluke when she won gold in the same event the following year at the 1986 Edinburgh Commonwealth Games.

Ferguson was a great all round sports woman, representing Queensland in cross country running. She began rowing at the age of 29 with immediate success winning various Queensland titles in her first year and her first national title a year later.

In only her second season of rowing and her first in single skulls, Ferguson was undefeated throughout Australia. She was the Australian lightweight sculls champion in 1985 and 1989, the heavyweight sculls champion in 1986, and she shared the double sculls title in 1986 and 1988. She went on to win two selection trials for the 1986 Edinburgh Commonwealth Games – the New South Wales and Victorian titles. She also won the Nell Slatter Trophy in 1985, 1988, and 1990, awarded to the winner of the women’s interstate single sculling championships.

In April 1986, Ferguson contested the open events to gain more competition. Conceding some rivals 20kg in weight, she won the unrestricted singles and doubles events.

Before she competed in the 1986 Edinburgh Commonwealth Games, she contracted a virus which put her in bed for a week. After leaving her sick bed to compete, she won gold in the lightweight sculls in a tight finish from New Zealand Skuller, Philippa Baker. It was a courageous effort; Baker passed her with 800m to go and Ferguson summoned all her resources to get to the front again.

Defending her title at the World Championships in Nottingham after the Games, Ferguson was still suffering from the effects of her illness and was unable to reproduce her best form. She did well to finish fifth in the final.

Ferguson represented Australia eight times at various international competitions but never at an Olympic Games. 1988 was considered to be her best chance of winning a medal, but that year the Australian selectors decided not to send any female rowing competitors.

Ferguson continued to compete throughout the 90s and became the only mother to have rowed on a national team, winning an open national rowing title at the age of 45. In 1987 she was awarded the Medal of the Order of Australia (OAM) for her services to rowing.