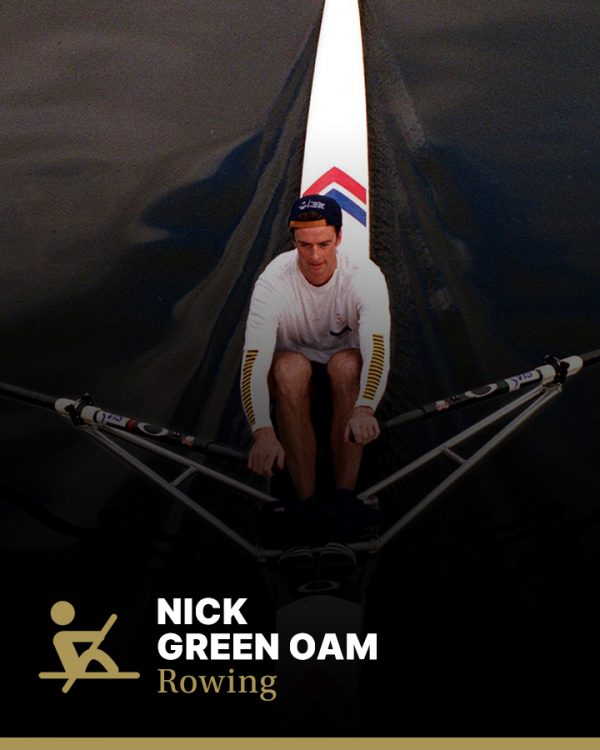 Nick Green OAM was inducted into the Sport Australia Hall of Fame in 2001 as an Athlete Member for his contribution to the sport of rowing.

Nick Green is one of Australia’s finest rowers, competing in two Olympic Games for two gold medals with the “Oarsome Foursome”.

The quartet – James Tomkins, Andrew Cooper, Mike McKay, and Green, coached by a school teacher with a passion for rowing, Noel Donaldson – established its quality by winning the world coxless fours championship in 1990 at Lake Barrington, Tasmania; characteristically, the rowers spent the morning of that final indulging in a relaxed round of golf.

During a two month tour of Europe the following year, the foursome won the world title in Vienna as well as the Lucerne Regatta. It was during this year, 1991, that it forged its reputation, not only as a combination to be ranked with the most formidable in Australia’s sporting history -with Bradman’s 1948 cricketers, Hopman’s Davis Cup squads, various packs of Wallabies -but also as an offbeat, articulate group with a whimsical approach to life. They bantered often, roistered occasionally, windsurfed on European lakes, and were accused wrongly (by former Norwegian coach Thor Nilsson) of not being serious enough about their training. In fact, they were no less dedicated than the best international crews, just different from most in style.

Armed with two world titles and an unbeaten record, the foursome headed for the Games as one of Australia’s most likely gold medal prospects. In the lead up to the Games, they began to look vulnerable for the first time in heavy water at the Lucerne Regatta, having to come from behind to win narrowly from the Dutch crew. A fortnight later they were beaten in a regatta at Amsterdam, finishing eight seconds behind the winning United States team.

Allowing for the foursome’s renowned talent for relaxation between major events, Donaldson felt it was time for a serious reappraisal. He swapped the boat places of Cooper (from number 3) and Green (from bow) to give smoother passage through the water, and he armed the crew with the new ‘cleaver’ oars, which most other international crews had already adopted. The cleavers were shorter than conventional oars, with blades, which gave deeper bite into the water. Crew and coach took off for an Italian village on the edge of Lake Varese, swore off the grog until the Games, and applied themselves to training.

At the Olympic rowing venue of Lake Banyoles, 130km from Barcelona, the crew won their first heat in 5 min 59.18sec, the fastest of any in the regatta. In the semi-final, which the Australians also won, they were unusually cautious over their first half-dozen strokes, and not completely happy afterwards with their form. They focused hard on the final, with Donaldson expecting an early charge from Slovenia and an assault over the second half from the United States. The Slovenians did go out furiously to an early lead, but paid the price and folded. The Americans threw everything into a late challenge, but the Australians stepped up their rating to put the race away.

Following Barcelona, Andrew Cooper retired from the crew and Drew Ginn took his place in the boat. Despite taking a break from competitive rowing for two years, the new crew successfully defended their Olympic title at the 1996 Atlanta Games.

In 1998 the crew returned to international competition and rowed as a coxed four, winning gold at the World Championships in Cologne, heralding the crew’s return. At the same regatta Green teamed up with fellow crewmember Tomkins to win gold in the coxed pairs.

Green’s preparation for the 1999 season was hampered by a serious back injury, and in September 1999 announced his retirement from the international scene.

Green was one of the eight flag bearers of the Olympic flag at the opening ceremony of the 2000 Sydney Olympics. In 1993, he was awarded the Medal of the Order of Australia (OAM) for his services to rowing.