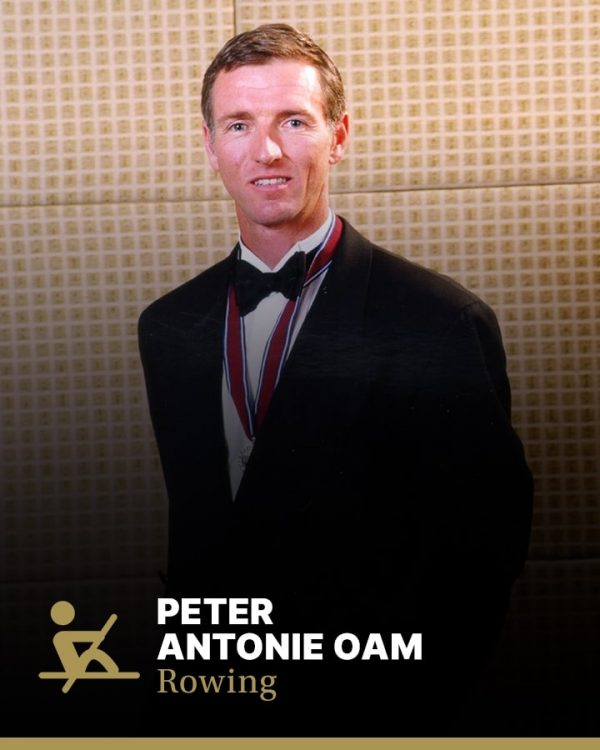 Peter Antonie OAM was inducted into the Sport Australia Hall of Fame in 1998 as an Athlete Member for his contribution to the sport of rowing.

Antonie began rowing as a teenager at Xavier College, Melbourne, where he was in the 1975 Head of the River eight. Initially, he was a crewman, competing in fours and eights at national championships, but turned to sculling in 1979. With a career extending across three decades, Antonie is undeniably one of Australia’s most durable and versatile rowers.

In 1977, he began a run of medal wins in the world rowing championships as a member of the Australian silver medal winning combination in the men’s lightweight coxless fours. This was echoed by a bronze medal win in the same category in 1978, and a silver medal as part of the Australian men’s lightweight eights in 1983. Antonie then took all before him in 1986, winning gold in both the world lightweight single sculls and the Commonwealth Games lightweight single sculls in Edinburgh. Following this, his achievements were recognised with a Medal of the Order of Australia (OAM) in 1987. But there was more to come.

Antonie achieved another bronze in the men’s double sculls at the 1990 world championships. Following this, Australian selectors decided to pair Antonie and fellow sculler Stephen Hawkins for the double sculls. Hawkins was 21 and lacking in height, while Antonie was 34 and a built up lightweight. They appeared to lack both the power and physique of Merv Wood and Murray Riley, Australia’s double sculling stars of an earlier generation. Despite this, the pair succeeded from their first outing in the Australian championships at Lake Barrington.

As well as having only come together shortly before the 1992 Barcelona Olympics, the Antonie-Hawkins combination conceded 15kg to other double scull teams at the Games, and faced a massive challenge to succeed. Rowing against the odds, they finished ahead of Austria and Holland to win Australia’s first rowing gold medal in 44 years. Fittingly, they were thereafter dubbed the ‘Pocket Rockets’, and their scull was renamed ‘Barcelona 92′, becoming part of the collection at the Australian National Maritime Museum.

Antonie has been described as the finest all-rounder in the history of Australian rowing. He is the only rower to have won all three major national titles – the Kings Cup for eights (as stroke), the President’s Cup for single sculls and the Penrith Cup for lightweight fours.