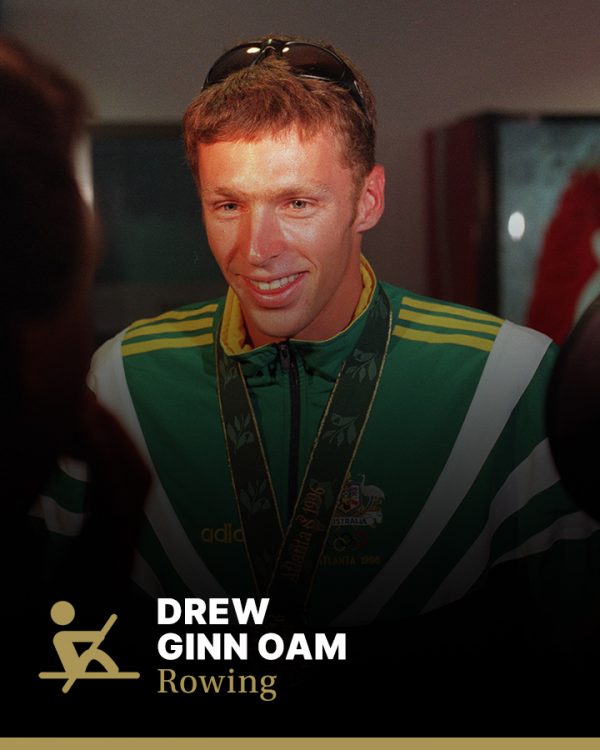 Drew Ginn OAM was inducted into the Sport Australia Hall of Fame in 2018 as an Athlete Member for his contribution to the sport of rowing.

Ginn remains one of Australia’s most decorated Olympic athletes, from any sport, winning three gold medals and a silver from four Games as well as five golds, a silver and two bronze from eight world championships.

Having been introduced to the sport at Melbourne’s Scotch College, where he was a gifted athlete who won school colours in four different disciplines Ginn represented Australia in the eight at under 23 level in 1994. He came to international prominence at the 1996 summer Olympics at Atlanta where he joined Mike McKay, James Tomkins and Nick Green in the coxless four, replacing the retired Andrew Cooper and played an integral role in the Oarsome Foursome, as the crew was famously known, winning their second successive gold medal.

After missing the 2000 Olympics -in which he and Tomkins would have started favourites for the gold in the pairs — with a severe back injury which required two years of rehabilitation, Ginn returned to win gold with Tomkins at Athens in 2004. He then linked with a new partner Duncan Free in the same event at Beijing in 2008, winning another gold after competing in such intense pain in the final because of another back injury that the victory was hailed as one of the most courageous in Australian Olympic history. He returned to a different coxless four for his fourth Olympics in London 2012, teaming with William Lockwood, James Chapman and Joshua Dunkley-Smith and winning silver behind the all-conquering Great Britain crew after setting an Olympic record in their semi-final.

Ginn retired after the London Olympics and in 2014 he became the fourth Australian, behind Peter Antonie, McKay and Tomkins to be awarded the Thomas Keller Medal, given by the International Rowing Federation for an outstanding career. It is the highest honour in rowing and recognises exemplary sportsmanship as well as great oarsmanship. In 2010 he was inducted into the Rowing Victoria Hall of Fame.