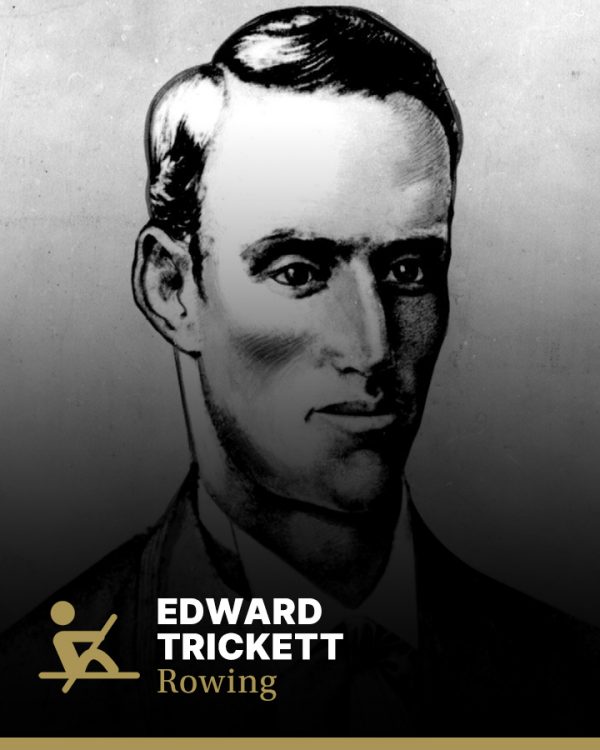 The first Australian to be recognised as a world champion, in any sport, was a rower. His name was Edward Trickett and on June 27, 1876, he defeated James Sadler on the Thames River in England for the world title. Winner of over 150 trophies, Trickett was one of the most versatile rowers of his time.

By the year 1874 he was gaining a reputation as a rower and in the Balmain Regatta of that year, he won the outrigger race and was in the winning whaleboat crew. Later that same year he placed second to Michael Rush in the Clarence River Champion Outrigger Race. At the Anniversary Regatta of 1875 he won the light skiffs race and was now the best sculler in the colony of New South Wales.

In May 1876 the Sydney innkeeper, James Punch, a former sculler himself, took Trickett to England where he won Australia’s first world sporting title on June 27, 1876, by defeating the two-time champion, Englishman Joseph Sadler, for the world championship, starting a golden age for Australian professional sculling. On the Putney to Mortlake course on the Thames he beat Sadler in a time of 24 mins 36 secs. Upon his return to Sydney, 25,000 people greeted him and he was wined and dined all around the state.

Trickett won several races over the next couple of years and earned enough money to buy a hotel. He became licensee of Trickett’s Hotel and later became the proprietor of the International Hotel which was located on the corner of Pitt and King Streets in Sydney.

In June 1877 Rush challenged Trickett for the NSW championship. The race was unequal because Trickett used the new sliding seat and Rush continued to use a fixed seat. In a ?200-a-side race, Trickett won, after training daily for a month. Alan May reports in ‘Sydney Rows’ magazine that it was “a race that was said to have excited more interest than any other event that has ever happened in the sporting world of Australia”.

In June 1878, the champion sculler was involved in an accident when a rolling keg of beer crushed his hand and several fingers had to be amputated. This was to affect the balance of his stroke in future races and was possibly the cause of the downturn in his rowing but in August 1879 he defeated Elias Laycock in a ?200-a-side championship contest. Laycock was without doubt one of Australia’s finest scullers but was never able to become world champion.

In June 1880 he travelled to England but lost his world title in November to the Canadian Ned Hanlan on the Thames and was also defeated in a match race by Wallace Ross. The title race seemed to be over before they reached Hammersmith Bridge, Trickett lost to the Canadian in a time of 26:12 seconds and three lengths behind; thus losing his world title.

Two years later in 1882 aged 31 years he challenged Hanlan for the title but lost again to the Canadian. Hanlan was to go on and become one of the greatest rowers of all time. Trickett returned to Australia and in 1884 he moved to the Oxford Arms Hotel in Rockhampton, Queensland. He had apparently been given the hotel by an admirer.

On June 14, 1888 he came out of retirement to race Hanlan on the Fitzroy River. Some 10,000 spectators watched Trickett, then aged 37, be beaten and lose his money on this race.

Although associated with the hotel industry for much of his life, Trickett seemingly found religion after having been duck shooting on the Sabbath. It is reputed that he changed his ways and became a teetotaller. He also became an envoy for the Salvation Army and worked in the Department of Trade and Customs for some time.

In 1916, whilst visiting his son in Uralla, NSW, Trickett was injured working in a gold mine when the walls of the mine shaft collapsed. He died a few days later from the injuries.