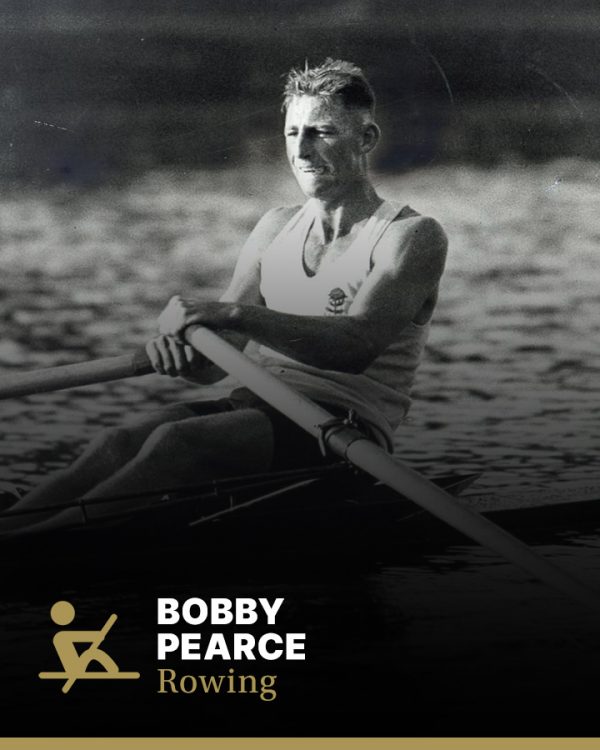 The finest sculler of all, professional or amateur, in all the years before World War II, was Henry (Bobby) Pearce. His victories in the Olympics of 1928 and 1932 made him the first Australian to win gold at successive Games, and the only single sculler before the war to win the event twice.

Pearce was a member of a talented sporting family; his grandfather, Harry, once beat the fabled sculler William Beach, his father, Harry II, was a former Australian champion who sculled twice for the world title, his brother, Sandy was a member of the touring rugby league Kangaroos in 1908/09, Sandy’s son Cecil represented Australia in the single sculls in Berlin in 1936, and Cecil’s son Gary was an oarsman in three Olympics, in Tokyo, Mexico City, and Munich. The Pearce family is definitely the ‘First Family’ of Australian rowing.

Pearce grew up in Sydney’s Double Bay. Even the women in his family used to row and scull competitively. Coached by his father, he won his first race at the age of six (in an under 16 handicap) and his first open event at 14. In 1926, aged 20, he took the New South Wales and Australian championships, and he held them until 1928, when he easily won a series of selection tests for the 1928 Amsterdam Olympics. Then came the shock; an accusation that he had rowed as a professional before competing as an amateur. Pearce protested vigorously that it was a case of mistaken identity, and it was in fact one of his brothers who had rowed professionally. He made a statutory declaration, the NSW Amateur Rowing Association conducted an investigation, and he was cleared in time to be named in Australia’s team of 18 for the Games.

In his first encounter on Amsterdam’s Sloten Canal, Pearce was matched with Walter Flinsch, the five times German champion. It was reported that the Australian had the easiest of victories, pulled up, then waited for half a minute for his opponent to finish. He won his next match, against the Danish titleholder Schwarz, with eight lengths to spare. In his quarter-final, against Frenchman V. Savrin, Pearce not only set an Olympic record of 7 min 42.8 seconds, but, according to one Dutch newspaper, he also won the goodwill of the children of Amsterdam. He did this with one spontaneous gesture of grace under pressure: he pulled up mid-race to allow a duck, followed by a small flotilla of ducklings, to cross the course, to the delight of the onlookers, mostly children. Pearce caught the Frenchman to win that race easily, and won the semi-final against Theodore Collett, of Great Britain, by four lengths without much effort. In the final, he was matched against the undefeated American Kenneth Myers, whom he beat by four lengths to set another Olympic record of 7:11.0 seconds. That record stood for 44 years, until the Soviet Union’s Yuri Malishev took less than one tenth of a second off it in Munich 1972. Pearce was not really pressed in any of his five races, and his deceptively relaxed stroking style game him an air of easy invincibility. Thanks to his large winning margins and his behaviour in the episode of the ducklings, his was one of the more popular victories in Amsterdam.

Pearce was an easy selection for the Australian team to compete at the 1932 Los Angeles Olympics. Now living in Hamilton, Canada, Pearce only needed to drive his car 4800 miles to join his teammates in LA. He had tried to enter for the Diamond Sculls at Henley in 1929, but had been barred under the ruling that anyone who was ‘by trade or employment for wages a mechanic, artisan or labourer’ was ineligible. The race was officially for gentleman, and Pearce, because he worked as a carpenter, was deemed by the Henley regatta committee not to qualify as such.

In 1930, Pearce was reduced by the Depression to the task of picking up scrap paper at the Sydney Showgrounds. Later the same year, he went to Canada for the Empire Games where he won the single sculls title and the admiration of Lord Dewar, the Scottish whisky tycoon. Soon afterwards, he accepted an offer to become Dewar’s Canadian sales representative, and he settled in Hamilton. Dewar nominated Pearce for Henley again, this time under the apparently more gentlemanly occupation of whisky salesman, he was accepted for the Diamond Sculls, winning the race by six lengths in 1931.

Five scullers contested the Olympic championship, and after two heats and a repechage, four lined up in the final; Pearce, William Miller (USA), Guillermo Douglas (Uruguay), Leslie and Southwood (Britain). Pearce, in a boat called ‘Mirrabooka’ which had been bought for him by the Australian Olympic Federation and shipped across with the team, appeared always to have control of the final, although the winning margin over Miller was only three quarters of a length in 7:44.4 seconds.

Pearce turned professional in 1933 and won the world title from Ted Phelps of England in their match in Toronto. He successfully defended his world title against American Bill Miller in 1934 and Australian Evans Paddon in 1938. He remained undefeated until his retirement in 1945. He remained in Canada with his family, his son (also named Bobby) became the Canadian champion in the double sculls in 1964.