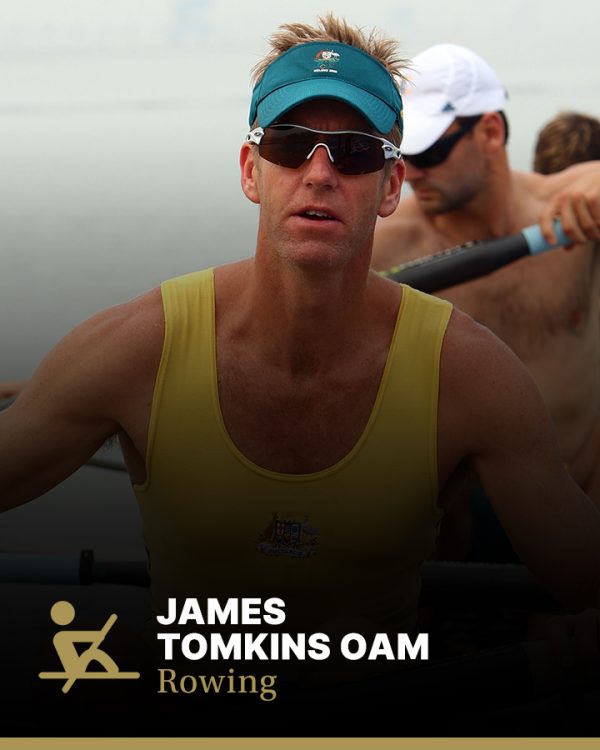 James Tomkins OAM was inducted into the Sport Australia Hall of Fame in 2012 as an Athlete Member for his contribution to the sport of rowing.

James Tomkins is one of only four people in the world to have rowed at six Olympic Games.

Outstanding in coxless pairs, famous for a foursome, he also began and ended his 20 year international career in World Championship-winning eights.

Despite this versatility and durability he is perhaps best remembered as part of the “Oarsome Foursome” the coxless four which won World titles in 1990, ‘91 and ’98 and which won Olympic gold in 1992 and 1996. (In ’92 Tomkins was teamed with Nick Green, Mike McKay and Andrew Cooper; by the time of their ’96 success Drew Ginn had replaced Cooper).

Tomkins came to prominence in 1986 as a member of a World Championship and Commonwealth Games-winning eight.

His final Olympic appearance as a competitor was in 2008 aged 43, in the eight which finished sixth. The same year he was a member of the eight which won the FISA World Cup.

Along with his international success James Tomkins notched up 15 national titles in Kings Cup crews between 1985 and 2008. He eventually retired, aged 45, in 2010. He has been an inspiration for many people to pursue sport beyond the prime of youth.

He was awarded an Order of Australia Medal in 1997 and was named in the 2003 FISA crew of the year. Fittingly he carried the flag for Australia at his final Olympics, at Beijing in 2008.

He now serves on the IOC Athletes Commission.