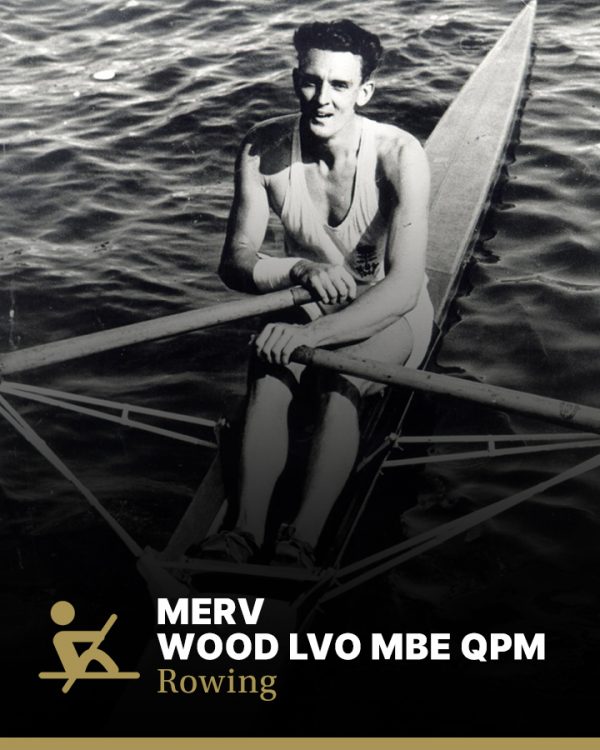 Mervyn Wood competed in four Olympic Games over 20 years and finished his career with a full set of medals. He also won four Commonwealth gold medals and one silver, two Diamond Sculls, the Philadelphia Cup and 12 national championships. These remarkable achievements are made more so by the fact that World War II robbed Wood of what should have been his most rewarding years of competition, two Olympic Games, during which he would have been in his twenties.

Wood grew up in Randwick, New South Wales, and attended Sydney Boys High School, where he represented his school in rugby union, swimming and most successfully, rowing.

Following high school, Wood became a police cadet and rowed for the NSW Police Rowing Club. The police team was selected to represent Australia at the 1936 Berlin Olympics and at 19 years of age, Wood appeared in his first Games, rowing at number five in a team which dominated in Australia but was unsuccessful overseas. The team was eliminated in the repechage and did not make the final.

Upon his return, Wood made police constable. After the majority of his crew retired, Wood took up sculling. He worked in the police force in the Criminal Investigation Branch, and in 1944 joined the Royal Australian Air Force as a navigator.

After the end of World War II, Wood won state and national championships in 1946, 1947 and 1948 and was selected to represent Australia in the single sculls at the 1948 London Olympics. Wood traveled to London ahead of the rest of the team and won the Diamond Challenge Sculls event at the Henley Royal Regatta. At the Olympics, Wood won all of his races including the final, which he won by 14 seconds. He celebrated by smoking his pipe – he was a lifelong smoker who only put aside the habit for the Olympics.

Wood would go on to win the national single sculls championship a record seven straight times. At the 1950 Auckland British Empire Games he won the single sculls and with compatriot Murray Riley the double sculls. As the 1948 Olympic champion, Wood was awarded the Philadelphia Challenge Cup as the best amateur sculler in the world, which Wood defended in 1950.

Wood represented Australia in the single sculls event at the 1952 Helsinki Olympics, where he was honored by being selected to carry the Australian flag at the opening ceremony. On the journey to Finland, Wood stopped in England and repeated his victory at the Henley Royal Regatta in the Diamond Sculls. He was a favorite to win the Olympic event, but lost the final by 1.7 seconds to the USSR’s Yuri Tyukalov.

Although he never offered it as an excuse, as a child, Wood had injured his arm which occasionally caused him distress while rowing including during the summer of 1952. This may have affected his performance at the Games, but Wood also faced far stiffer competition than in 1948, which were held shortly after World War II, and his main rival Tyukalov would prove to be one of the best oarsmen of his generation.

At the 1954 Vancouver British Empire and Commonwealth Games, Wood rowed in both the coxless four and the double sculls events. The finals were separated by only 45 minutes, and Wood won gold medals in both events.

In 1956 Wood, at the age of 39, lost his national sculling title to teenager Stuart Mackenzie, who was selected ahead of Wood to represent Australia in the single sculls at the 1956 Melbourne Olympics. But Wood and his partner Riley were selected for the double sculls. Among others in the final, Wood and Riley faced the Soviet team that included Tyukalov. Tyukalov’s boat again triumphed, the Americans finished second, and Australia third, giving Wood bronze at age 39. Wood was again named the flag-bearer in the opening ceremony, the only Australian to have twice had the honor.

Wood’s final competition was the 1958 cardiff British Empire and Commonwealth Games, where, teaming with Stuart Mackenzie, he won silver in the double sculls at age 41.

Following his retirement from rowing, Wood returned full-time to his post in the New South Wales Police Force, eventually becoming Police Commissioner in 1977.

One of the proudest moments of his life was running with the Sydney 2000 torch near his home in Maroubra.

In 1977 he was awarded the Royal Victorian Order -Members of the 4th Class (LVO) as Commissioner of the NSW Police during the royal visit. He was made a Member of the Order of the British Empire (MBE) in 1957 for his services to rowing.