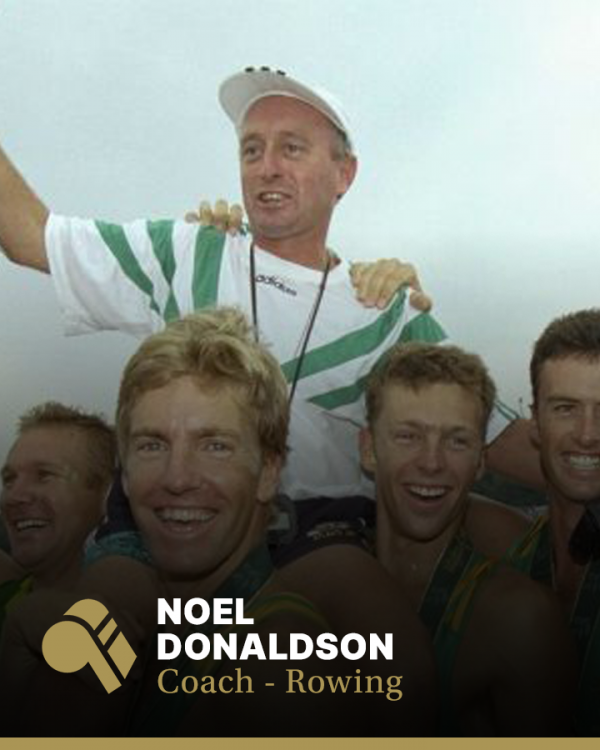 Without question Noel Donaldson is best known as the coach of the world conquering ‘Oarsome Foursome’ since their inception in late 1989. With three World Championships (1990, 1991, 1998) and back-to-back Olympic gold medals (1992, 1996), they were the most feared coxless four in the world.

Donaldson was the coach of the men’s pair of James Tomkins and Matthew Long in their bronze medal performance at the 2000 Sydney Olympics. In 2004 he was the men’s head coach of the Australian rowing team at the 2004 Athens Olympics.

In 1979 Donaldson was selected to represent Victoria and Australia as the coxswain of the men’s heavyweight eight. Victoria won the Kings Cup, and the Australian crew finished fourth in the World Championships.

After the 1992 Barcelona Olympics, Donaldson took a position as a senior rowing coach at the Victorian Institute of Sport (VIS), and in 1993 became the head coach of rowing at the Institute. From February 2001 he held both the VIS position and the national men’s head coach position with Rowing Australia.

In September 2004, Donaldson was appointed the High Performance Director of Rowing Australia to lead the rowing team towards the 2012 Beijing Olympics.