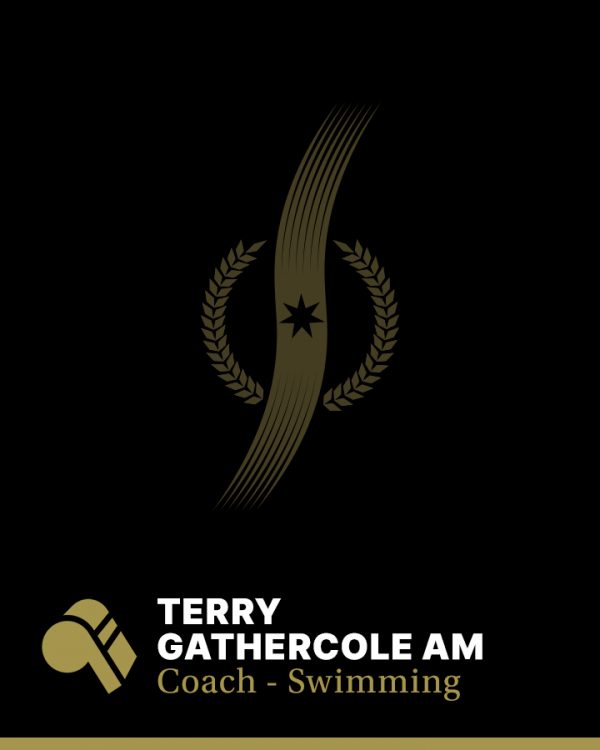 When Terry Gathercole was 18 months old, his parents moved to West Wyalong (New South Wales) where he learned to swim at the age of three. Throughout his school years, he spent many hours in the pool, eventually known as “the skinny kid who could really swim laps.”

Gathercole was a plumber by trade, a swimmer by choice and a swimming coach by profession. He was good at all three, and each helped the other. He used the breaststroke thighs he developed crouching under sinks to make Olympic teams and set many world records. He used his ups and downs as a world record swimmer to gain the savvy that made him a top coach in both Australia and the United States. He again used his plumbing skills when he built the first heated indoor swimming pool in Australia.

Gathercole was a natural breaststroke swimmer who broke world records and won Olympic and Commonwealth Games medals. He coached himself until he won his first national title in 1953, when he decided to use workouts sent to him in the mail by Forbes Carlile. Before national and international competitions, Gathercole trained in Sydney with Carlile, who was his only coach throughout his career.

Gathercole finished fifth in the 200m breaststroke at his first Olympics, the 1956 Melbourne Games. He then went on to break the world breaststroke record six times within a two-month period. At the 1958 Cardiff British Empire and Commonwealth Games, he won two gold medals, the 220yds breaststroke and the 4x110yds medley relay with John Monckton, John Devitt, and Brian Wilkinson. But shortly before the start of the 1960 Rome Olympics, he was in a car accident that hindered his preparation for the Games.

Although he was not as fit in 1960 as he was in 1958, Gathercole left Rome with a silver medal as a member of the Australian 4x100m medley relay team, along with David Theile (backstroke), Neville Hayes (butterfly) and Geoff Shipton (freestyle).

In December 1960, Gathercole became a full-time professional coach. With his own two hands, he built an indoor short course pool in Castlecove, a northern suburb of Sydney.

Noting the team’s lack of depth after the 1976 Montreal Olympics (where Australia won only one bronze medal in the pool), Gathercole, the head coach, accurately predicted that it would take another 20 years for Australian swimming to regain its former status.

He produced two Olympic breaststroke gold medallists, Ian O’Brien in 1964, and Beverley Whitfield in 1972. At the 1991 World Championships in Perth, Linley Frame, yet another Gathercole breaststroke protégé, won the 100m breaststroke in world record time.

The momentum created by Frame’s success, coupled with Gathercole’s influence in promoting excellence throughout Australia in this much neglected stroke, started a surge of world-class performances by Australian female breaststroke swimmers.

Realising the need to develop depth in the program, Gathercole helped other coaches by suggesting breaststroke training programs and staging specialised training camps for breaststroke swimmers.

In 1968, Gathercole accepted an invitation to start a swimming team in Midland, Texas. During his five years there, the team grew from 30 to more than 300 swimmers. Gathercole served on the board of the American Swimming Coaches Association – the first and only non-American ever to be so elected – where he won high respect and was elected president. However, he had to decline the office because of a prior decision to return home to Australia.

The new constitution saw the demise of the old Amateur Swimming Union of Australia, replaced by the new Australian Swimming, Inc. He served as vice president of the organisation from 1992 to 1996 and was president from 1997 to 2000, becoming the first professional coach anywhere in the world to rise to such prominence in a national governing body. Through character and example, Gathercole filled the office of president of Australian Swimming with much of his own wisdom. What you saw was what you got. He was fair-minded, and he didn’t take sides for political reasons.

In addition to many notable contributions to the sport, Gathercole played a leading and successful role in the fight against performance-enhancing drugs. Although failing health confined him to a wheelchair in the last year of his life, he was responsible for the smooth organisation of the Australian swim team’s preparation for the 2000 Sydney Games. Moreover, his planning ensured the continued momentum of Australian swimming.

Gathercole was the Australian Olympic swimming team coach on three occasions, 1964 Rome, 1976 Montreal, and 1992 Barcelona. He was also head coach at two World Championships, 1975 Columbia and 1991 Perth. In 1986 he was appointed as the senior coach of men’s swimming at the Australian Institute of Sport.

In 1985, Gathercole was inducted into the International Swimming Hall of Fame in Fort Lauderdale, Florida, and in 1988 was made a Member of the Order of Australia (AM) for his service to swimming.