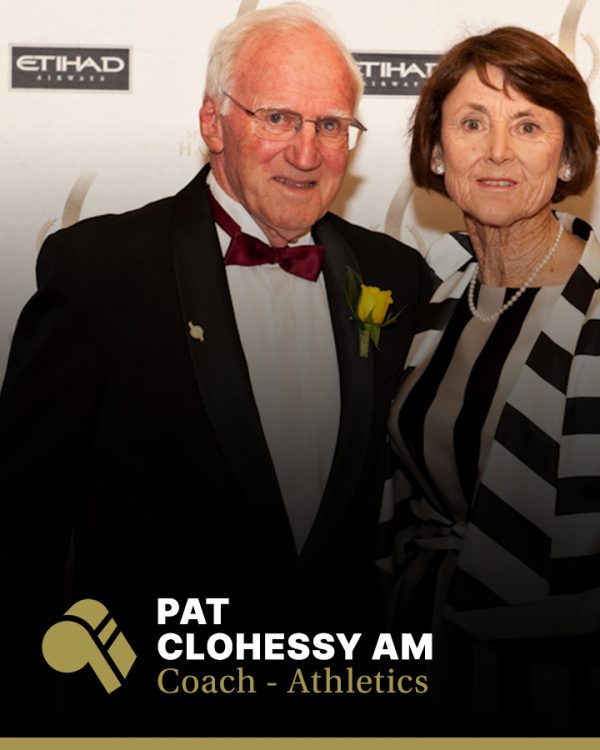 Pat Clohessy has made a valuable contribution to Australian sport through coaching some of Australia’s finest athletes. The list includes world marathon champion and dual Commonwealth champion Rob de Castella as well as Simon Doyle, ranked 2 in the world at 1500m in 1990 and 1991, and other Australian record holders Shaun Creighton (3000m, 3000m steeple and 10,000m), Krishna Wood (3000m and 5000m) and Susan Hobson (marathon).

Clohessy won the US NCAA Championship at the University of Houston in 1961 and 1962 and the AAU 3 miles in 1963. He placed 7th in the 3 mile event at the 1962 Perth British Empire and Commonwealth Games behind Olympic champion Murray Halbert and Australian legend Ron Clarke, and third in the World Games in Helsinki in 1963. This is an outstanding achievement as it was during one of the most competitive years in middle distance running.

The major highlights in his coaching career were at the 1980 Moscow Olympics and 1984 Los Angeles Olympics where he was Distance Running Coach. As a testament to his ability he was AIS Distance Coach from 1982 until 1994, directing the programs of leading Australian athletes like Shaun Creighton, Rob de Castella and Simon Doyle. He was a great student of coaching techniques and new methods.

Clohessy refined these skills and knowledge over the years, and is currently head coach at the University of Queensland Athletic Centre.

Clohessy was made a Member of the Order of Australia (AM) in 1988 for his service to sport as a track and field coach.