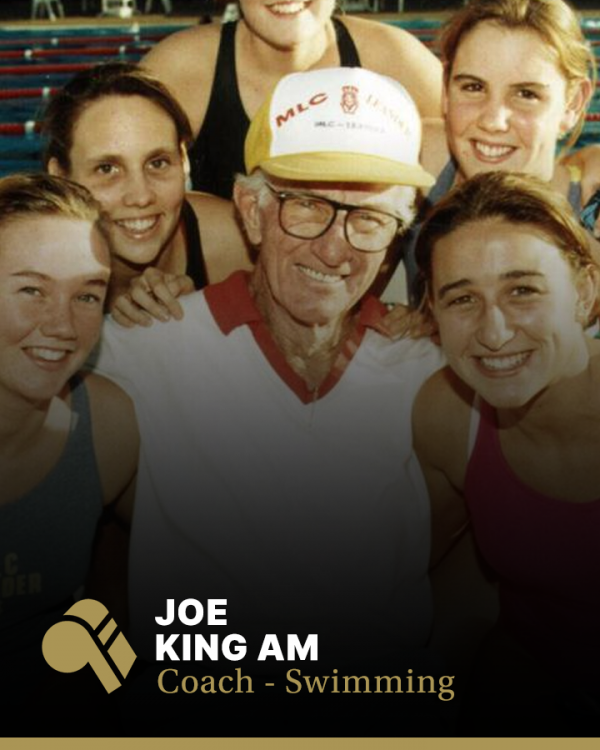 Joe King coached Australian representatives on Commonwealth Games, World Championship, and Olympic Games teams from 1966. He has had anywhere between one and ten swimmers on the national teams and has also coached and/or managed many other Australian teams world wide.

King not only had the respect of coaches around Australia but also around the world. His love of swimming was not only used to produce swimming champions but his motivation to continue coaching until the age of 80 was to develop streamlined swimming machines, not only for competition, but also for safety reasons. With his world champion, Hayley Lewis, he brought a great deal of attention to Australia and Australian swimming.

At the 1990 Auckland Commonwealth Games, King’s swimmers walked away with nine gold, three silver, and two bronze medals with Lisa Curry and Hayley Lewis leading the charge. At the 1991 World Championships in Perth, Lewis again dominated the pool with one gold, one silver, and one bronze.

King coached Lewis for nine years until 1993, when he retired as a representative coach. He was a hard taskmaster but always fair, had a wonderful sense of humour, and plenty of time to listen to his pupils. He was a great inspiration to all that came into contact with him. His knowledge was world class and showed through his champion pupils. He worked as an amateur coach all his life, never taking money from his athletes.

He also coached A grade netball for many years, his team, the Goldwings, won seven Brisbane championships in a row.

In 1993 King was made a Member of the Order of Australia (AM) for his service to swimming.