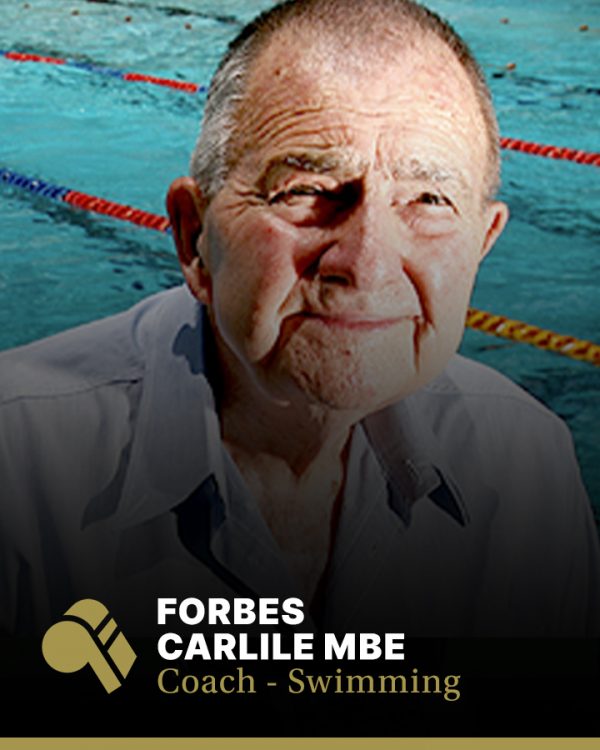 One of the most controversial and successful Australian swimming coaches, Forbes Carlile was responsible for the performances of Olympians such as Shane Gould, Karen Moras, Gail Neall, John Davies, Terry Gathercole, and Ian O’Brian.

Carlile was Australia’s first post-World War II Olympic swimming coach, and in 1952 became Australia’s first athlete to compete in the pentathlon (an event which intrigued him when he first watched it in 1948 as Australian swimming coach) at the 1952 Helsinki Olympic Games. Remarkably, Carlile finished 25th in a field of 51. He remains the only person to have coached then later competed at the Olympic Games.

Carlile studied at the University of Sydney under Professor Frank Cotton, graduating and later lecturing there in human physiology. His pioneering work on elite athlete training methods included interval workouts, pace clocks and log books, heart rate tests, training under stress and T Wave studies of the ventricles. He developed techniques such as even paced swimming and the use of two-beat kicks for long-distance events.

Carlile first started coaching in 1946 at the Palm Beach rock pool, north of Sydney. Success there led to him being appointed as the Australian swimming coach for the 1948 London Olympics and he then went on to be the head coach at the 1956 Melbourne Olympics and Scientific Advisor at the 1960 Rome Olympics. At the 1964 Games he was head coach for the Dutch Olympic swimming team. He was Australia’s head coach at the 1973 Belgrade swimming world championships where Australia won nine gold medals.

Dedicated to scientific training studies Carlile used himself as a guinea pig in 1950 when he entered a marathon road race, finished 10th of 40 starters, but collapsed afterwards due to a kidney malfunction. Determined to prove it was his personal physical condition and not the strenuous race that caused his collapse, Carlile later ran the same course with no ill effects.

His book, ‘Forbes Carlile on Swimming’, was the first modern book on competitive swimming with its study of tapering and the historical development of the crawl. Other books by Carlile include A History of Crawl Stroke Techniques to the 1960s, An Australian Perspective, and A History of Australian Swimming Training.

The Carlile swimming organisation, operating on the north shore of Sydney, has 60 full and part-time coaches teaching 1400 lessons per week with classes of eight levels — from babies to Olympic swimmers. Clinics have taken him, with his Olympic coaching wife and partner, Ursula, to mainland China, Japan, USSR, Ethiopia, Puerto Rico, Holland, and North and South America.

In 1977 Carlile was inducted into the International Swimming Hall of Fame at Fort Lauderdale, USA. Other awards include the Queens Jubilee Medal (1977), ASI Life Member (2003) and NSSA Hall of Fame (2003). In 1977, Carlile was made a Member of the British Empire (MBE) for his services to swimming