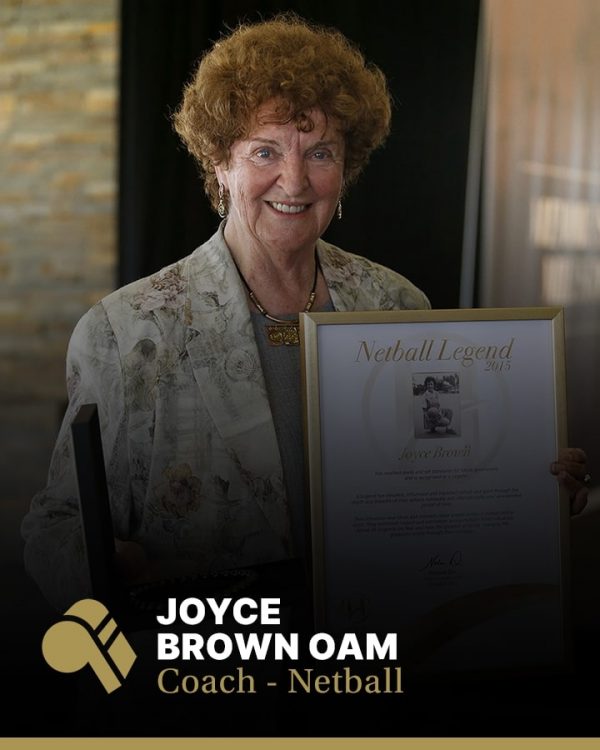 Joyce Brown OAM was inducted into the Sport Australia Hall of Fame in 1989 as a General Member for her contribution as a coach to the sport of netball.

Joyce Brown, coach of the multi world championship winning Australian netball team, is one of Australia’s most successful coaches. She has had an influence on netball coaching from beginners to elite over the last 40 years and has served the game well by setting a number of past and present champion players on the right course.

Brown played netball for Victoria from 1958 to 1963 and captained the victorious Australian team in the first world netball championships in 1963. She followed her successful netball career by becoming an All Australian (AA) umpire and coach. She graduated from the University of Melbourne as a physical education teacher and prior to her full-time involvement in netball, she taught the subject for twelve years.

Brown coached the Australian netball team to three world championship titles, 1975 (New Zealand), 1983 (Singapore) and 1991, and world dominance for ten years. She was also AA coach in 1981 in the Tri Test against NZ and England, and in 1982 she was elected AA coach for the cancelled Singapore tour. In 1990 she was appointed the first full-time Australian national coach. She was the Victorian state coach from 1972 to 1975 and 1979.

From 1980 to 1983 she was National Coaching Director of the All Australian Netball Association (AANA), and it was here that she set the standards for the current Netball National Coaching Accreditation Scheme and devised the first modified form of netball for kids, Catch ‘n’ play. She was also a member of the AA Coaching Development committee.

In 1981, the AANA chose to recognise her playing and coaching achievements by awarding her the AA Service Award. She received the AA Umpires Award in 1961.

Since her ‘retirement’ in 1991, she has lectured in coaching, and increased her involvement with Australian football, as a pre-match AFL radio commentator, as well as working with AFL clubs as a motivator. She returned to coaching from 1999 to 2002 with the Melbourne Phoenix, leading them to the premiership in 2000 and 2002.

In 1992 Brown was awarded the Medal of the Order of Australia (OAM) for her services to sport.