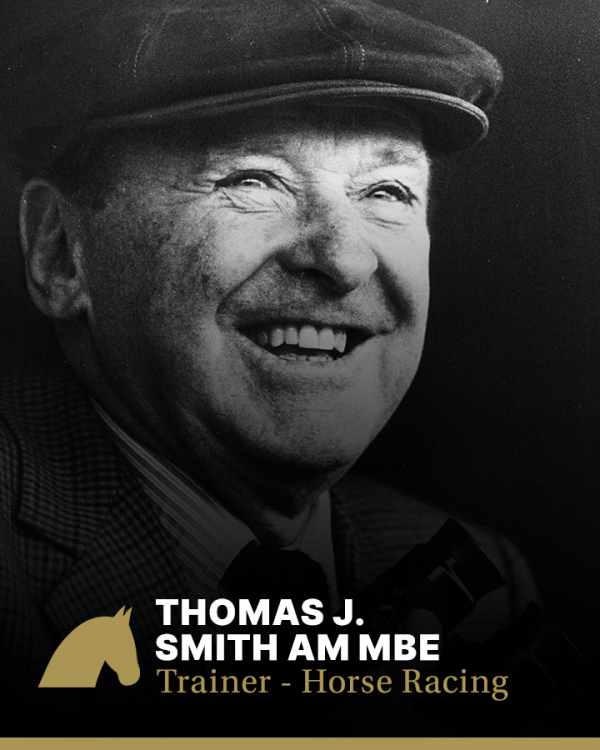 Tommy Smith boasts an extraordinary record of having won the Sydney trainers premiership on 34 occasions. His flamboyant style and gregarious character endeared him to race goers and his list of achievements was remarkable.

Smith left school at the age of 13 and headed for Melbourne to apprentice for Bill McLaughlin, then moved to Sydney where he became apprentice to trainers Son Mackinnon and Mac Sawyer.

He had limited success as a jockey. When rising weight and a serious thigh fracture put an end to an inauspicious career, he turned to training. From an early age his eye for horses was uncanny. Even at the peak of his career, when he had 60 horses in training, Smith could recognise in an instant any one of them.

Living hard and working hard, Smith broke in a rogue galloper given to him by Sawyer and called him Bragger: after himself. At this time Smith registered himself as a trainer and registered his silks of green and blue, which were to become famous in later years. It took Smith 18 months to tame Bragger to the extent where he could race.

He rented horse boxes in Kensington, housing Bragger in one box, whilst he lived in the other. Bragger proved to be quite a success in races in Sydney and country New South Wales. Bragger continued to win races until he was a ten year old, when he had to be destroyed after becoming caught in a float fire. Smith was devastated.

Bragger’s success meant that Smith was soon establishing himself as a major trainer in Sydney and, when Playboy won the 1949 AJC Derby, beating the regally bred Delta, people stood up and took notice of the young upstart trainer. Always having an eye for publicity, Smith never missed a chance to promote himself in the newspapers.

Success continued for Smith and in 1955, he won the Melbourne Cup with Toparoa, defeating the champion Rising Fast. He went on to win the Melbourne Cup again with Just a Dash in 1981. During his long career Smith trained many champions such as Redcraze (1956 Caulfield Cup, 1957 Cox Plate), Gunsynd (1972 Cox Plate and Doncaster Handicap), Kingston Town (1980, 1981 and 1982 Cox Plates) and the mighty Tulloch (1957 Caulfield Cup, 1960 Cox Plate).

Tulloch was undoubtedly the greatest horse Smith trained. Following a brilliant season as a three year old he tragically contracted a virus which kept him from the racecourse for two years. Through Smith’s care and perseverance and the genius of his vet Dr Percy Sykes, they brought Tulloch back from near death in one of racing’s greatest stories. Tulloch went on to win 36 of his 53 race starts and set race records for the Cox Plate and Caulfield Cup. In winning the 1957 AJC Derby he took two seconds off Phar Lap’s race record. In honour of his champion, Smith named his main stables Tulloch Lodge.

Smith also trained many winners of Australia’s richest and most prestigious two year old race The Golden Slipper including the brilliant filly Bounding Away, whom Smith bred, owned and trained. Smith also won the nations top Weight for Age race the W.S. Cox Plate seven times. When Smith retired he had trained over 7000 winners including 279 Group 1 winners.

Smith and his wife Valerie had one daughter Gai, now Gai Waterhouse, who, after a short acting career in England (where she appeared in Doctor Who), took out a trainers licence. Waterhouse is now not only the leading female trainer in Australia, but is the leading trainer in Sydney and Australia. She has won five Sydney Training Premierships after a little over ten years in training.