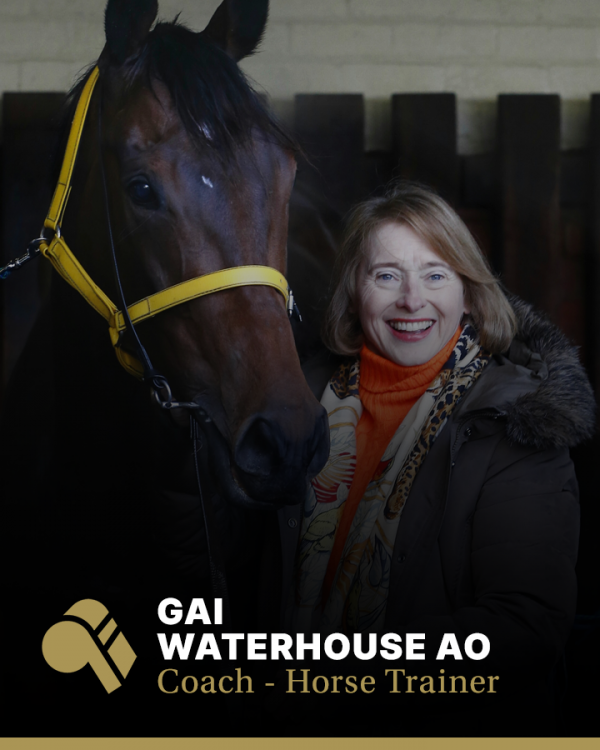 Gai Waterhouse was inducted into the Sport Australia Hall of Fame in 2018 as a General Member for her contribution as a trainer in the sport of horse racing.

Before embarking on her career as one of Australia’s most successful horse trainers, Gai Waterhouse studied at the University of New South Wales, then after graduating, worked as an actor and appeared on both Australian and English television.

Widely acknowledged as the First Lady of Australian racing, Waterhouse has trained more than 7000 winners, including more than 145 in Group 1 races. She’s won seven Sydney Trainer’s Premierships and, when Fiorente won the 2013 Melbourne Cup, became the first Australian woman, and just the third woman ever, to train the winner of the ‘race that stops the nation’.

As the daughter of legendary Sydney trainer Tommy J. Smith, Waterhouse worked under her father’s tutelage for 15 years before being granted an Australian Jockey Club licence in 1992. She trained her first winner – Gifted Poet – in March that year, then in October, in the Metropolitan Handicap, Te Akau Nick brought her a maiden Group 1 victory.

Waterhouse took over her father’s Tulloch Lodge Stable when he fell ill in 1994 and enjoyed immediate success, with quality colt Nothin’ Leica Dane winning the Victoria Derby and finishing a gallant second in the Melbourne Cup, a race no three-year-old had won since Skipton in 1941. In the 1996-97 season she trained ten winners and won her first Sydney Premiership, then in 2001, she trained the first, second and third place getters in the Golden Slipper resulting in her winning the first of three consecutive Sydney Premierships and in 2002/03 she equalled her father’s Sydney training record of of 156 wins. In 2004/05 Waterhouse trained another eleven Group 1 winners and added a fifth Sydney Premiership to an already overflowing trophy cabinet. Other notable horses trained by Waterhouse include: Golden Slipper winners Dance Hero, Ha Ha and Australian Two-Year-Old of the Year, Sebring, prolific Group 1 winners Grand Armee, Juggler, and All Our Mob as well as two-time Epsom Handicap winner Desert War.

In 2007 she joined her father – he was an inaugural inductee, with a record 282 Group 1 wins – as a Member of the Australian Racing Hall of Fame. Only Smith and Legend of Australian Sport, the late Bart Cummings, had trained more Group 1 winners (236) when Waterhouse was inducted.