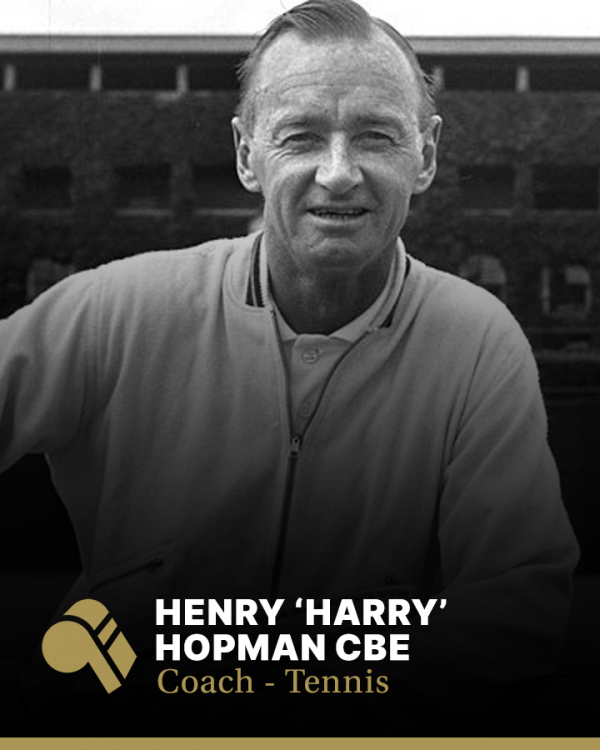 Henry ‘Harry’ Hopman was captain-coach of 22 Australian Davis Cup teams between 1938 and 1967. With players such as Frank Sedgman, Ken McGregor, Lew Hoad, Ken Rosewall, Rod Laver, Neale Fraser, John Newcombe, Fred Stolle, Tony Roche, Roy Emerson, Ashley Cooper, he won the Cup an unmatched 16 times. His great skill was spotting talent and lifting it to Wimbledon and Davis Cup winning levels. Hopman always knew exactly what was going on with all his amateurs. He had no children, no hobbies, and tennis was everything to him.

Emphasising super fitness, he drove and inspired his players, and built pride in their under populated country by beating the rest of the world. In 1938, the first of his 22 teams lost the Challenge round final to the US. But he was back with the same pair in 1939, Adrian Quist and Jack Bromwich, to beat the US from 0-2 down after the first day in Philadelphia.

Hopman concentrated on his job as a newspaperman after World War II. But after the Aussies lost the Cup to the USA in 1946, and three more finals through to 1949, there was a clamor for him to return to the captain’s chair. With two youngsters Sedgman and McGregor, he won the Cup in New York in 1950. This saw the beginning of Australia’s dominance of world tennis for the next quarter century. His teams compiled a 38-6 record.

In late 1951, when it appeared that Davis Cup star Sedgman was about to turn professional, Hopman used his column in the Melbourne Herald to lead a fund-raising campaign designed to keep Sedgman in the amateur ranks. Enough money was raised to purchase a gasoline station in the name of Sedgman’s bride-to-be and Sedgman remained an amateur for one more year. The pious Hopman, a strong opponent of the paid game, did not regard this as an infringement of Sedgman’s amateur status.

Hopman never liked the pros and he battled open tennis to the bitter end. As an example of his journalism, Sedgman, by then a successful touring professional, once volunteered to help train Australia’s Davis Cup team. Hopman accepted the offer, then took Sedg aside and told him that what Hoad and Rosewall needed was confidence. So he told Sedg to go easy on them, which he gladly did. After a few days, Hopman wrote an exclusive in his newspaper column revealing how his kids could whip Sedgman and how this proved once again that amateurs were better than the pros.

In 1960, Hopman anticipated some bad weather approaching Sydney just before the Challenge round was due to be played against Italy on the outside grass courts at the old White City stadium. Expecting that practice facilities would be limited, he flew the entire squad to Brisbane for two days of solid grass-court practice while their visiting rivals were washed back to their hotel rooms in Sydney.

Following his last Davis Cup match as captain, a loss to Mexico at Mexico City in 1969, he emigrated to the USA to become a highly successful professional coach at Port Washington Tennis Academy, for future champions such as Vitas Gerulaitis and later John McEnroe. He later opened the Hopman Tennis Academy, at Largo, Florida, with his second wife, Lucy. The Hopman Cup for mixed doubles play is now named in his honour each January in Perth, Western Australia.

In 1976 Hopman was made a Commander of the British Empire (CBE) for his service to sport, particularly tennis, and was inducted into the International Tennis Hall of Fame in Newport, Rhode Island in 1978.