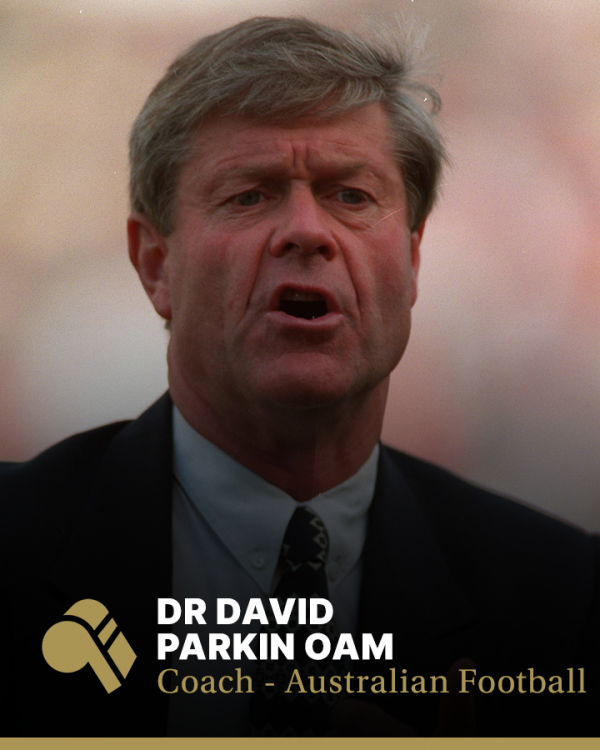 Dr David Parkin OAM was inducted into the Sport Australia Hall of Fame as a General Member in 2010 for his contribution to coaching the sport of Australian Football.

Despite paying 211 games with Hawthorn and captaining them to the 1971 Premiership, David Parkin’s greater fame rests on his record as coach where the determination he had shown as a player was backed by an innovative and analytic mind.

He coached Hawthorn through 1977-80, winning the Premiership in ’78, then Carlton from 1981 to 85, wining Premierships in ’81 and ’82. He coached the Blues again from 1991-2000 with a Premiership in ’95. Between those terms he coached Fitzroy for three seasons. He was All-Australian coach in 1995. Both as coach and in subsequent media roles he has been an advocate for the development of players outside football.

When David Parkin joined Hawthorn in 1961 as a 19 year-old his early reputation was built as a tough back pocket player, a role he occupied for most of his 211 games with the club. His leadership qualities soon emerged however, and in 1969 he became club captain, leading the team to a Premiership in 1971.

As a player he was Hawthorn’s best and fairest in 1965 and represented Victoria five times.

It was as a coach however, that he later put his stamp on the game. Appointed Hawthorn coach in 1977 he guided them to a Premiership the following year. They cold not repeat the effort in the following years, finishing seventh and eighth and in 1981 a coaching roundabout saw Alan Jeans take over at Hawthorn while Parkin became coach at Carlton. The move was a spectacular success for Parkin who guided Carlton to successive premierships in 1981 and 82.

In 1986 he took over the coaching role at the struggling Fitzroy football club, a job which he held till the end of the 1988 season. He then spent two years as State Director of Coaching and as a Specialist Umpires coach for the AFL.

In 1991 he returned as coach of Carlton and steered them to another Premiership in 1995. He retired from coaching in 2000, but continues to supply insightful analysis as a media commentator.

His work on strategies for developing and motivating people has not been confined to football. He has developed a sports coaching degree course for Deakin University and authored or co-authored a series of books on development of a team ethos in business and sport.