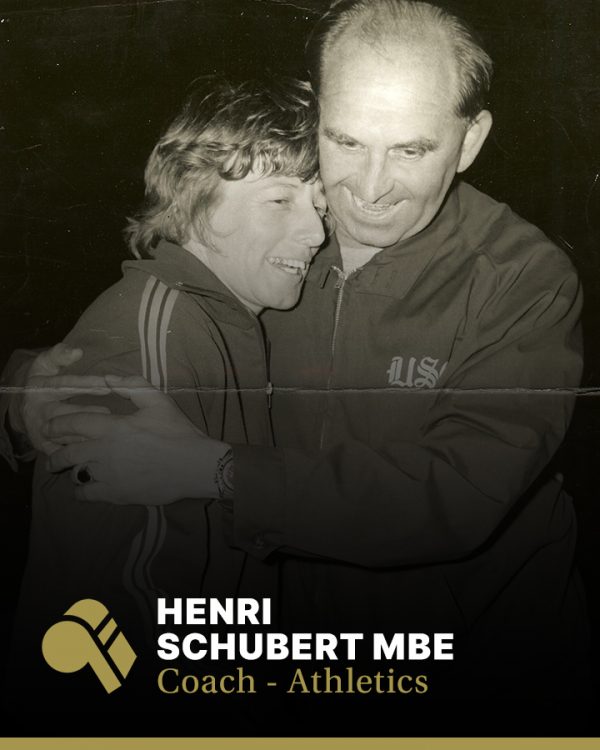 Henri Schubert immigrated to Australia just prior to the Second World War in 1938. In 1946, he joined the St Stephens Harriers Amateur Athletic Club in Melbourne and competed until 1949. He then took up coaching, firstly at women’s clubs and later individual female athletes.

Schubert was appointed Co-ordinator of Training to the Australian team for the 1972 Munich Olympic Games, the 1974 Christchurch Commonwealth Games, and was coach of the Oceania team for the first Athletic World Cup in Düsseldorf in 1977.

Schubert was senior coach of the Australian Track and Field Coaches Association and was instrumental in setting up training camps where he coached and lectured. From 1976 he was athletic advisor to the Pentridge Northern Prison, which involved fortnightly training sessions in ‘A’ Division.

In 1987 Schubert was awarded the International Amateur Athletics Federation Diploma as one of the all time six best Australian athletics coaches. That same year he received a Merit Award from the Australian Athletic Union (now Athletics Australia) and was made a Life Member of Athletics Victoria.

In 1979 Schubert was made a Member of the British Empire (MBE) for services to amateur athletics, and his name has been given to the Athletics Australia coach of the year award -the Henri Schubert Memorial Award.