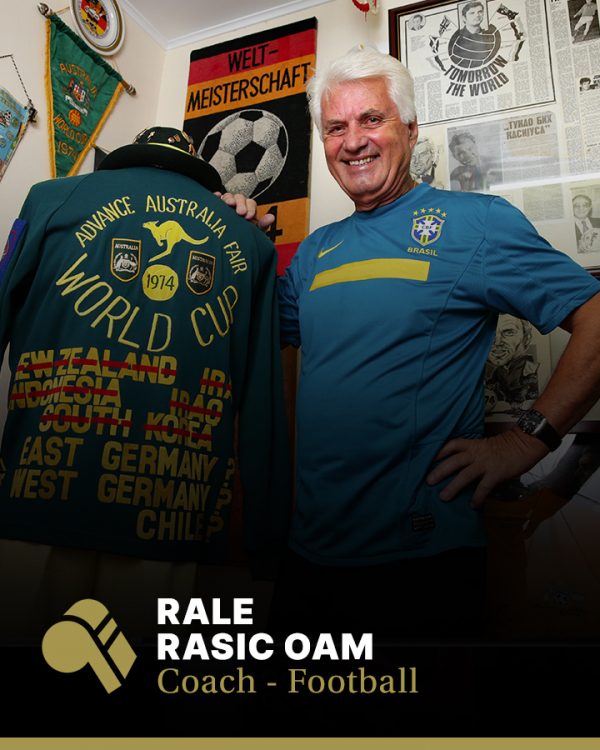 Rale Rasic OAM was inducted into the Sport Australia Hall of Fame in 1989 as a General Member for his contribution to the sport of football.

Rale Rasic has a unique position in Australian soccer having been the first coach to take Australia to the finals of the World Cup in West Germany 1974. Rasic coached Australia in 58 international matches from 1970 to 1974.

Rasic immigrated to Australia in 1962, but returned to Yugoslavia after 18 months to serve in the army. His obligations met, Rasic returned to Australia, and played football in the Victorian league. He revolutionised the game in Australia, was appointed national coach in 1970 at just 26 years of age, masterminded Australia’s qualification and participation at the 1974 FIFA World Cup.

After a disappointing performance at the World Cup, the Australian Soccer Federation dumped him as national coach, replacing him with Englishman Brian Green (who later fled the country after he was caught shoplifting). Rasic believes that he was dumped because he was not seen as being a real “Aussie”. Rasic stated, “They took from me something that I was doing better than anyone else. I was a true-blue Aussie and nobody can deny that. I taught the players how to sing the national anthem”. These days, as the first coach to take Australia to the World Cup finals, Rasic is widely respected in Australian football.

A massive lobby for Rasic to return as Australia’s World Cup coach for 1979 began early in 1978 but never eventuated because Rasic made crystal clear his terms: complete and utter control and absolutely no interference from the Australian Soccer Federation. The ASF would never give a coach the job under those circumstances and conditions.

In 1974 Rasic was listed among the top 35 coaches in the world by German Soccer expert Fritz Hack, and in 1977 and 1987 he was voted the national league coach of the year. He was a television presenter on SBS, during the Australian network’s 2006 FIFA World Cup coverage.

In 2004 Rasic was awarded the Medal of the Order of Australia (OAM) for his service to soccer as a player, coach and administrator.

WATCH: Football Australia’s tribute to Rale Rasic – 51 years after being named the youngest Socceroos coach ever.