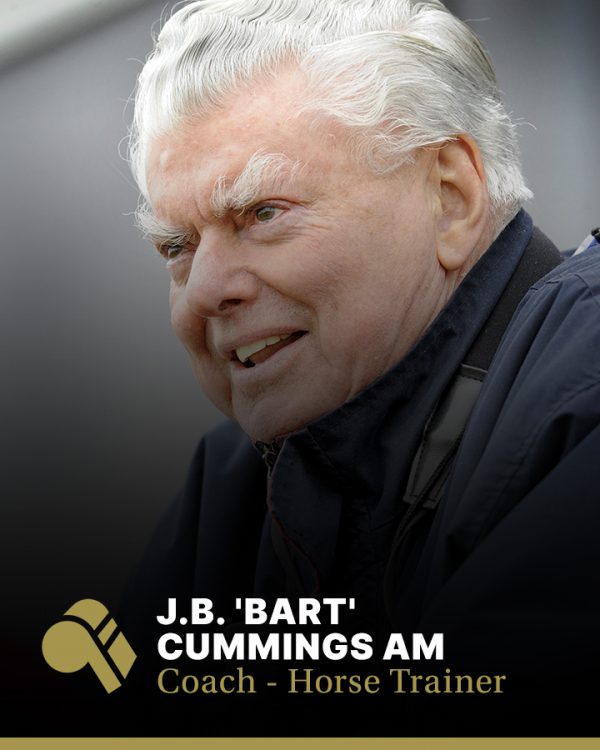 Bart Cummings AM was inducted into the Sport Australia Hall of Fame in 1991 as a General Member and was elevated to Legend of Australian Sport in 2008 for his contribution to the sport of horse racing.

Cummings first experienced the thrill of a Melbourne Cup win at 23 years of age when he strapped the home-bred ‘Comic Court’ for his father Jim Cummings in 1950. His training feat to date of 12 Melbourne Cup winners and five quinellas has earned him the title of ‘Cups King’.

Raised in Adelaide, Cummings worked for his father as a strapper at the Adelaide stables, despite being allergic to hay. He took out his own training licence in 1953, utilising his father’s stables. He won his first Group 1 with ‘Stormy Passage’ in the SAJC Derby in 1958 and went on to win 268 Group 1 races in the 62 years since.

Cummings established stables at Flemington, now known as Saintly Place, in 1968, which were still his Melbourne headquarters until his passing, and set up stables at Randwick, now known as Leilani Lodge, in 1975, from which he managed his training and spelling operations.

Cummings first hit the headlines when he not only won his first Melbourne Cup in 1965 with ‘Light Fingers’, but also went on to train the winners of the two subsequent years, ‘Galilee’ in 1966 and ‘Red Handed’ in 1967. For good measure, he also trained the second placegetters in 1965 and 1966. This was just the start of his affinity with the Melbourne Cup. In 1966/67, Cummings scored seven Group Cup wins when he trained the winners of the Melbourne, Caulfield, Sydney, Adelaide, Brisbane, Sandown and Queens Cups with four different horses.

Proving his versatility as a trainer, Cummings also trained horses at the time which were winning Group 1 sprint races, such as the Lightning Stakes with ‘Anna Rose’, and the major Group 1 race for two-year-olds, the Golden Slipper Stakes with ‘Storm Queen’.

He has trained the winner of the Golden Slipper four times and won the premier Group 1 sprint race at Flemington, the Newmarket Handicap, a record eight times, most recently with ‘Shaftesbury Avenue’ in 1991.

The 1972/73 season saw the first of Cummings’ horses to be named Champion Racehorse of the Year, in the four time Derby winner ‘Dayana’. Since then he has consistently added to the list, with ‘Taj Rossi’, ‘Leilani’, ‘Lord Dudley’, ‘Maybe Mahal’, ‘Hyperno’, ‘Beau Zam, ‘Let’s Elope’ and the home bred ‘Saintly’ the most recent addition in 1996/97 to bring the current total to nine.
In 1974, Cummings was the first trainer not only in Australia, but also in the British Commonwealth to train the earners of over one million dollars in prize money. The prize money earnings were supported by 20 Group 1 wins, which included Leilani’s five Group 1 successes and the first of ‘Think Big’s’ two Melbourne Cups.

Cummings broke another record in 1988, when he was the first trainer to reach earnings of over six million dollars in prize money, this time with eleven Group 1 winners with horses such as champion stayer ‘Beau Zam’ and sprinter/miler ‘Campaign King’.

Cummings purchased the historic property Princes Farm in 1988, located on the Nepean River at Castlereagh, within easy driving distance of the Randwick stables. The 150 acre spelling and breeding complex complemented Cummings’ training and breeding activities and it was at Princes Farm that Saintly was born and raised. The Cummings family have always bred their own horses as well as making purchases at the many yearling sales throughout Australia and New Zealand. Recent breeding successes include ‘Taikun’, ‘Flying Pegasus’, ‘Outback Prince’, ‘Hotel Grand’, ‘Suite’ and the promising pair ‘Kings Pride’ and ‘Blessus’.

In 1989/90, Cummings won the trainers premiership in three different states, NSW, Victoria and South Australia, the first time it had been done. There were 20 stakes winners and six Group 1 wins that season, including ‘Tristanagh’s’ VATC 1000 Guineas and VRC Oaks. He is now one of the few top trainers to operate stables at Flemington and Randwick, as well as running his own spelling and breeding complex.

The establishment of the Racing Hall of Fame occurred in 2001, and Cummings was an inaugural inductee. Cummings’ topline stayer ‘Galilee’ was inducted in 2005 for his staying performances in the 1960s, which included a Sydney Cup win by a margin of six lengths carrying 60.5kg in 1967.

In 2004, Cummings received a surprise honour from the VRC. The club presented him with Lifetime Membership, the first time a trainer has received the honour. The VRC also re-named the 2500m open handicap race previously known as ‘The Banjo Paterson’ race, ‘The Bart Cummings’ race, which appropriately, is a Melbourne Cup qualifying race.

Cummings was actively training from his Randwick and Flemington stables and was a regular attendee the annual yearling auctions looking for his next champion right up until his passing.

Cummings became a Member of the Order of Australia (AM) in 1982 for his services to the racing industry and his tireless promotion of racing to the public. He has received numerous awards over the years from sporting bodies, including Victoria Racing Media Personality of the Year 1997. In 2000 he carried the Olympic torch down the Flemington straight.