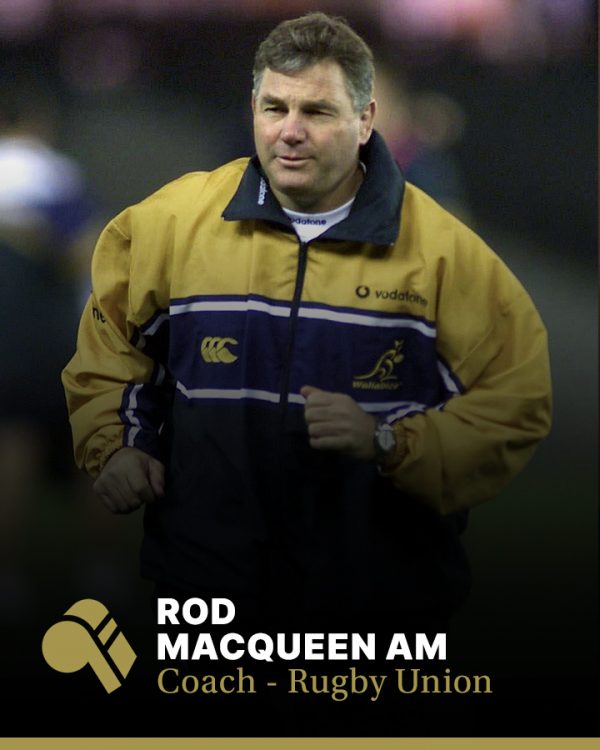 Rod Macqueen retired in July 2001 as head coach of the Australian rugby union team, the Wallabies, with the undisputed mantle as one of Australia’s most successful rugby coaches. At that time, Australia had recorded a 2-1 series win over the British Lions, a side comprising the best players from England, Ireland, Scotland and Wales. This was the first time in five series since World War II that Australia had defeated the British Lions in a Test series.

That series win concluded the most successful coaching era in the history of Australian rugby. In the period from late 1997 to 2001, the Australian rugby team claimed every major rugby trophy available to it in world rugby, including the ultimate prize the Rugby World Cup.

In 1998 Macqueen’s Wallabies, led by skipper John Eales, reclaimed the coveted Bledisloe Cup, defeating New Zealand’s All Blacks three Tests to nil, the first time such a feat had been achieved since 1929.

In 1999 he augmented his management team to achieve the specific goal of winning the Rugby World Cup. He introduced new practices and developed a style of play for the World Cup that he believed would provide a winning formula under the laws of the game as they stood. He introduced consultants to the team in the areas of defence and scrummaging and it was Australia’s superiority in these areas that proved critical to the World Cup victory.

Australia defeated Ireland in a domestic series, retained the Bledisloe Cup, then went on to win the Rugby World Cup in Wales. During the tournament, the Wallabies conceded just one try, winning six successive Test matches, including the final against France 35 -12.

Macqueen was then a driving force in pursuing law changes to rugby which he believed would open the game up and make it a better spectacle. The International Rugby Board agreed to experiment with the law changes, particularly in the area of tackling.

In 2000 Australia defeated Argentina in a two Test series, again retained the Bledisloe Cup, and for the first time since the advent of professional rugby, won the Tri Nations Series, the triangular competition involving the national teams of Australia, New Zealand, and South Africa. Australia also won the inaugural Nelson Mandela Plate against South Africa.

In the uncompromising world of international Test match rugby, Macqueen coached the Wallabies in 43 Tests, winning 34, losing eight, and drawing one for a winning percentage of 79%. As a coach, Macqueen always insisted on high standards on and off the field.

In 2003, Macqueen was made a Member of the Order of Australia (AM) for his service to sport, particularly rugby union football as coach of the Australian Wallabies