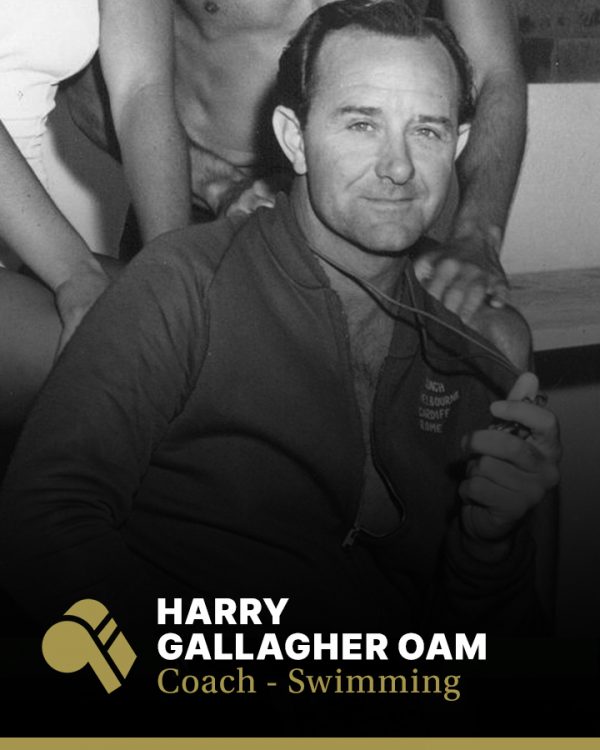 Harry Gallagher’s life in swimming began inauspiciously. He taught himself to swim so as to save himself from drowning, having fallen in a filthy, polluted river in Sydney. He went on to become one of Australia’s most astute and successful swimming coaches and is credited with first recognising Dawn Fraser‘s swimming potential.

Gallagher became a swimming coach by chance in the army, teaching his comrades how to save themselves in the slurries and flurries up in the tropics, because most of the soldiers he was with couldn’t swim.

Working with exercise physiologists as early as 1953, Gallagher went on to coach some of the biggest names in Australian swimming, including Dawn Fraser, Jon Henricks, Lorraine Crapp, Michael Wenden, Brad Cooper, and Lyn McClements among others. He coached the 100m gold medallist at four successive Olympics to amass a total of nine gold, six silver and three bronze Olympic medals. Had the 50m and the 200m freestyle events been included in the Olympics, his total could have been many more. At the British Empire and Commonwealth Games his pupils won 12 gold, six silver, and three bronze medals. His pupils also went on to win 201 Australian titles and create 52 world records.

Gallagher played a large role in Australia’s swimming success at the 1956 Melbourne Olympics and was the sole Australian swimming team coach at the 1968 Mexico City Olympics, where the Australian team, with an average age of 16, returned to Australia with world records and 17 medals, including many golds.

Gallagher was inducted into the International Swimming Hall of Fame at Fort Lauderdale in 1984 and in 1986, received the Medal of the Order of Australia (OAM) for his service to swimming.