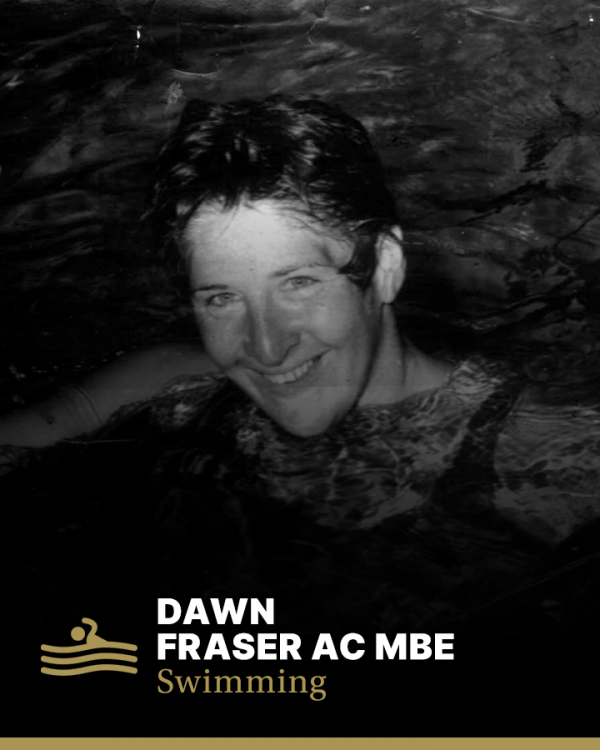 Dawn Fraser AC MBE was inducted into the Sport Australia Hall of Fame in 1985 as an Athlete Member and the first female member to be elevated to Legend of Australian Sport in 1993 for her contribution to the sport of swimming.

Dawn Fraser was one of the most iconic and most decorated athletes in Australia sport history while demonstrating the larrikin behaviour to match her ability at the same time. Her record in the pool included eight Olympic medals, six British Empire and Commonwealth gold medals and setting 23 individual world records and 12 as part of a team.

Dawn’s dominance of the 100m freestyle was part of her legacy claiming the Olympic title at the 1956 Melbourne, 1960 Rome and 1964 Tokyo Games, the first swimmer to win gold in three successive games of either gender. She was the first woman to break the minute for the 100m freestyle and held the record for the event for sixteen years.

Dawn first started swimming at the age of four at the Balmain Baths in Sydney before competing seriously by the age of eleven. It was by chance that Dawn and her friends stumbled across a squad session led by star coach and fellow Sport Australia Hall of Fame Member, Harry Gallagher. It was not by chance that Dawn and her friends disrupted the training session by jumping in the lanes and joining in on the session. A normal reaction would have been anger however, this was not the case for the Gallagher as he recognised the raw talent of Dawn. Shortly after this mischievous action by Dawn, Gallagher approached her family to make an offer for her to train with him. Dawn signed then and there to train with Gallagher’s squad at the Balmain Baths.

In 1949 at the age of twelve, Dawn was disqualified from racing on the grounds she had been involved in professional competition voiding her amateur status. This allegation forced her out of swimming. It wasn’t until 1951 that Coral McIntosh advocated for her. McIntosh established that Dawn had never received any money for swimming and helped to retain Dawn’s amateur status so then she joined the Balmain Ladies Amateur Swimming Club. Dawn was un-disqualified and the then secretary of the Amateur Swimming Union of Australia, Bill Berge Phillips, told her she would never swim for Australia, lighting the fire of determination.

Dawns return to the pool was at the New South Wales titles 1953/1954, with her results providing her with selection to the Australian Swimming Championships in 1954 at the Melbourne Olympics Pool.

In 1955, Dawn was selected as a reserve swimmer for the 1955 Australian Swimming Championships. When injury forced fellow Sport Australia Hall of Fame Member, Lorraine Crapp, to withdraw from the 220yds freestyle, Dawn got her chance to compete and winning the race in an Australian record time. Following the championships, Dawn devoted herself to training and improving.

When Gallagher was offered the chance to manage the City Baths in Adelaide, he persuaded the Fraser family to let Dawn, then a seventeen-year-old, to accompany him so that her training under him could continue. The summer of 1955/56 saw Dawn dominate in the pool winning every South Australian individual freestyle title before going to Sydney for the national championships and a spot in the Olympic training squad.

Dawn would continue her duel in the freestyle with Crapp at the national championship finishing second behind her in the 440yards before out sprinting her in the 110 yards and the 220 yards. Dawn set her first world record at the championships breaking Dutch swimmer Will den Ouden’s twenty-year-old record in the 100m freestyle. Dawn finished the championship with additional world records in the 200m and 220 yards events. Crapp claimed both Dawns v100m and 200m records in the lead up to the 1956 Melbourne Olympic Games.

The 1956 Olympics saw the first time the movement was held in the southern hemisphere and Dawns first games. Dawn raced the 100m freestyle setting an Olympic record in her heat to qualify fastest for the final. The final pitted Dawn and Crapp as the two fastest qualifiers and in neighbouring lanes with the two Australians going stroke for stroke, dead level with 25m to go Dawn broke away to win gold and set a new world record 62 seconds, a record Dawn held until 1971 when a teenage Australian swimmer named Shane Gould eventually equalled Dawn’s mark. The Australian swept the podium with fellow Australian Faith Leech finishing third behind Dawn and Crapp.

Dawn continued her dominance in the pool as part of the 4x100m freestyle relay team swimming a world record time and securing her second gold medal with her fellow medallists from the 100m final Sandra Morgan. Dawn last race of the games was the 400m freestyle which resulted in a silver medal behind Crapp.

1957 saw Dawn given the opportunity to swim in the Neo Nakama Pacific Championships in Honolulu along with Crapp as invitational positions. At the championship Dawn equalled her world record time for the 100m freestyle set at the Olympics before beating the 200m freestyle world record the next day. Dawn toured the United States following the event attending the competitions and breaking records.

At the 1958 Australian Championship Fraser continued her dominance in the pool including winning the 220 yards in world record time gaining selection for the 1958 British Empire and Commonwealth Games. In Wales at the games Dawn won gold in the 110yards freestyle and 4×110 yard freestyle relay however finished with a silver medal in the 440yards behind fellow Australian Ilsa Konrads.

Following the 1960 National Swimming Championships Dawn was selected in her second Olympic squad with a training camp in Townsville to ensure swimmers were up to the Olympic standard required for Rome. Heading into the 1960 Olympic Games in Rome expectations were high for gold medals from the Australian swimmers following their training camp which included swimming carnivals in which the world record for the women’s 4x100m relay was broken in by a team of Dawn, Alva Colquhoun, Konrads and Crapp.

Early in the heats of the 100ms Freestyle, Dawn’s Olympic record was beaten by American Chris Von Saltza relegating Dawn to second place heading into the semi-finals. She progressed to the final of the 100m, claiming back her Olympic Record before storming home to gold enhancing her Olympic Record. Dawn was still just shy of swimming under a minute having equalled her world record. The rest of her Rome Olympics saw her finish with two silver medals in the 4x100m freestyle and 4x100m medley before a fifth in the 400m freestyle and withdrawing from the 100m Butterfly. As a penalty for refusing to swim in the butterfly Dawn was sensationally left off the Australian team for overseas competitions1 along with other misdemeanours in Rome including not wearing the national track suit to receive her gold medal. 1961 started as a dry year for Dawn given her unofficial ban seeing her excluded from many international races, while stirring up public support for her to be included. When racing opportunities presented themselves Dawn ended on top of the dais however the elusive sub minute time remained.

Following a tumultuous year both in the pool and at home, Dawn picked up where she left off seeking selection for the 1962 British Empire and Commonwealth Games and the elusive 60second swim. At the National Championships held in Melbourne, which served as the selection trial for the Empire Games, Dawn enhanced her world record for the 110 yards freestyle by swimming in one minute exactly in the heats before going sub 60 seconds in the final with a time of 59.9 seconds. Dawn dominated at the games winning four gold medals in her four swims. In the 110yards she would lower her world record further from the time set at the selection trials earlier that year.

Dawn set her sights on making history with the approaching 1964 Tokyo Olympic Games looking to defend her 100m freestyle title for the third time. After qualifying for her third Olympic at a successful Australian championship including setting a 100m world record of 58seconds, Dawn was involved in a car accident which claimed the life of her mother and caused her to be in a neck and back brace for nine weeks. In the lead up to the Olympics there was doubt that Dawn was going to return in time and have to withdraw from competition however six months before the games she was back in the pool for an Olympic fund-raising campaign. Back in the pool her focus saw her continue to set the standard for the Australian team.

After much media speculation on if Dawn Fraser should carry the Australian Flag at the opening ceremony fencer Ivan Lund was selected and Australian swimmers banned from marching if they had competition in the first three days. Dawn and fellow teammate Marlene Dayman smuggled themselves out of the village to the ceremony to march with the team risking being sent home. Dawn didn’t let the controversy distract her winning her heat and semi-final of the 100m freestyle in times to match the gold medal performance of Rome. Winning gold in the final made Dawn the first person of either gender to win an event three times in the history of the Olympics. Her campaign was rounded out with a silver in the 4x100m freestyle relay and fourth in the 400m freestyle. Dawn continued to have issues with officials wearing a rival swimsuit instead of the team issued suit.

After finishing her swimming competitions, Dawn drew the attention of Tokyo police when she was caught stealing an Olympic flag near the Emperor’s Palace, no charges were laid and Dawn was given the flag to keep. Despite all the controversy, Dawn was chosen to carry the Australian Flag at the closing ceremony recognising her significant achievements in the Olympics. Upon arrival back in Australia she was banned by the Australian Swimming Union (ASU) from competitive swimming for ten years. This was reduced to four years after much publicity when Dawn took the ASU to court to get the ban lifted due to misinformation the ASU had told the press. Chief Justice Sir Leslie Herron ordered the ASU to lift the ban and to give Dawn an apology but with only 12 months to go it was too late to make the team and a fourth gold medal.

Dawn’s post swimming life saw her take on horse ownership, carrying her winning ways into horse racing and being involved in life of Balmain owning the Riverview Hotel for a period. One to give back, Dawn was elected to the New South Wales Parliament for the seat of Balmain in 1988 until the seat was abolished in 1991. For the sport she loved, Dawn was involved as a coach before becoming a mentor to all young swimmers.