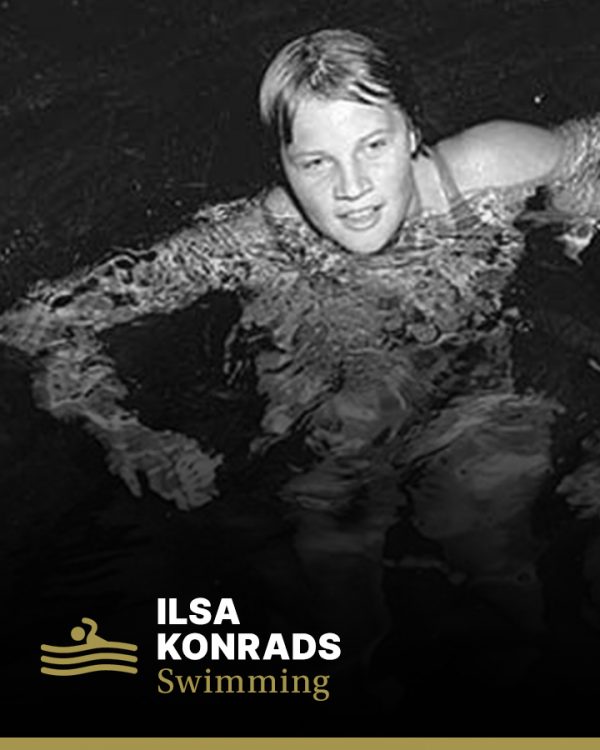 One of the supreme freestyle swimmers of her time, Latvian-born Ilsa Konrads was only 13 years old when she broke two world records (for 800m and 880yds) in January 1958. In the same New South Wales championships, her elder brother, John, who had been a reserve on the 1956 Melbourne Olympic team, also began his world record breaking spree. She went on to win Olympic silver and Commonwealth gold.

It was the beginning of a hectic two-year period for the ‘Konrads Kids’, who between them, broke 37 world records under the guidance of coach Don Talbot.

Born in Riga, Latvia, Ilsa emigrated with her parents Janis and Elza, grandmother, elder sister Eve, and elder brother John in August 1944, initially to Germany. This came after Latvia’s occupation by German troops during the Second World War and then re-occupation by Soviet troops. Living in Germany until 1949, their application to immigrate to the United States was refused on account of the large size of the family. They were relocated to a camp at Uranquinty, which was previously a base for the Royal Australian Air Force, in rural western New South Wales. There the early efforts of their father in teaching his children to swim to ensure their safety around the many watering holes and dams in the camp, and for the purposes of John’s therapy after suffering polio, were built upon by Talbot, teacher at the primary school they attended, and assistant coach to Frank Guthrie at the Bankstown Swimming Pool.

Every day, Ilsa and her elder brother John cycled to the Bankstown pool before sunrise, for a two-hour training session, before returning home for breakfast and then attending school. After school, they would cycle back to the pool and repeat the training regimen. In 1958, the results of Talbot’s regime training began to materialize, when at the age of 13, she broke the 800m and 880yds freestyle world records at the NSW championships, and then defeated Lorraine Crapp to become the first woman to complete 440yds under five minutes. Then, at the age of 14, defeated Lorraine Crapp and Dawn Fraser (1956 Olympic gold medalists) at the 1958 Cardiff British Empire and Commonwealth to win the 440yds freestyle event in a new Games record of 4 min 49.4 sec. It was an enormous task for one so young, who also suffered badly from nerves in international competition. The Duke of Edinburgh presented the medals to the trio.

In the two years preceding the 1960 Summer Olympics, she set world records in the 440yds, 400m, 1500m and 1650yds events. At the 1960 Rome Olympics, she suffered from nerves and was eliminated in the heats of the 100m freestyle, and managed fourth in the 400m freestyle, some 12 seconds slower than her personal best. She collected silver in the 4x100m freestyle relay, along with Fraser, Crapp and Alva Colquhuon.

Her last competition was at the 1962 British Empire and Commonwealth Games in Perth, where she claimed silver in the 440yds event.

In the ultimate testament to Ilsa’s domination of the swimming world throughout her career, she was honoured with induction into the International Swimming Hall of Fame at Fort Lauderdale, USA, in 1971. She took on journalism after retiring from swimming, and became Australian editor of highly respected magazines, interior design magazine, ‘Belle’, and Vogue.