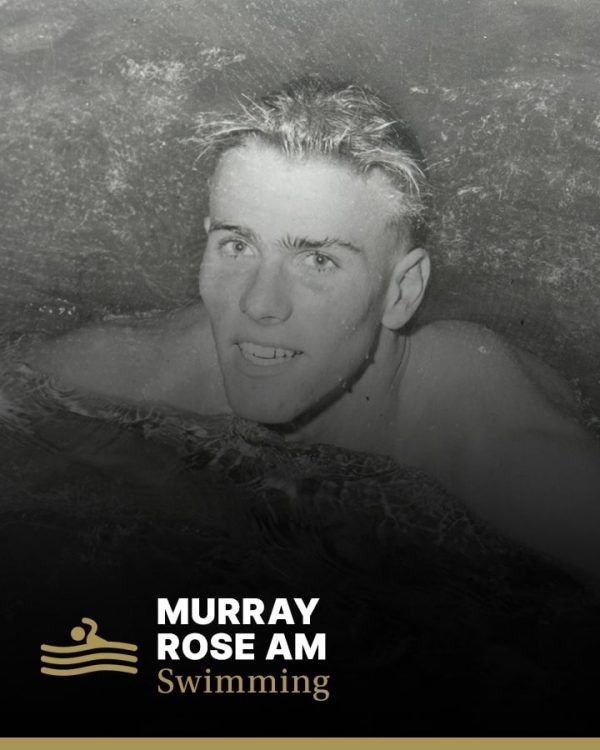 Murray Rose was Inducted in The Sport Australia Hall of Fame in 1985 as an Athlete Member for his contribution to the sport of swimming and was Elevated to “Legend of Australian Sport” in 1999.

The swimmer who matched Betty Cuthbert’s swag of gold medals at the 1956 Olympics was Murray Rose, then 17, whose early inspiration had been John Marshall. Rose had blonde hair, a striking profile that helped take him to Hollywood, and a diet that included nuts, raw vegetables and servings of seaweed. Inevitably he became known as the ‘Seaweed Streak’.

Rose was born in Birmingham, England, and was bought to Australia by his parents as an infant after the outbreak of World War II. He had his first swimming lessons at the age of five in Sydney from gold medal diver Dick Eve, and was seven when Sam Herford took over as a resident coach at the pool.

In January 1956, Rose slashed Marshall’s world record for 880yds by more than three seconds to 9 min 34.3 seconds. That was the first of his 15 world records. At the 1956 national titles he won over 440yds and the 880yds but finished third behind Murray Garretty in the 1650yds. Chosen to train with the Olympic squad in Townsville, he reached his peak just before the Games and within three days in October he set world records for the 400m (4:27.0) and 1500m (17:59.5), becoming the first swimmer to cover the longer distance inside 18 minutes.

At the 1956 Melbourne Games, Rose won the first of his three gold medals in the 4x200m relay, an event which had been dominated by American and Japanese teams ever since 1912, when Australasia won gold. Kevin O’Halloran led after the first 200m and John Devitt, Rose and John Henricks progressively extended the gap. They won in world record time of 8:23.6 seconds to beat the USA. Rose went on to win the 400m in Olympic record time of 4:27.3 seconds and the 1500m in 17:58.9 seconds. He became the youngest Olympian to win three gold medals during one Olympic Games and the first swimmer in 36 years to win both individual events.

Rose went to the United States after the Olympics and swam at the University of California but returned to Australia for the training camp prior to the 1960 Rome Olympics, where he defended his 400m title with a time of 4:18.3 seconds, won silver in the 1500m behind fellow Australian John Konrads, and won bronze as part of the 4x100m medley relay. He was the first swimmer ever to win the 400m freestyle at consecutive Games; that honour is now shared with Ian Thorpe (2000-2004).

Rose wanted to compete at the 1964 Tokyo Games but was unable to travel to Australia for the 1964 national championships because of a movie contract, and the swimming bureaucracy refused his entry into the Olympic trials, despite his setting a world record in the 1500m.

Rose’s last international meet for Australia was at the 1962 Perth British Empire and Commonwealth Games, and he won every event which he entered, adding four gold medals to Australia’s tally. That same year, he received the World Trophy from the Helms Foundation for outstanding performance in sport. Rose’s last competition was on September 5, 1964, when he set a new half mile world record of 8:55.5 in the Canadian nationals at Vancouver.

He was one of the eight flag-bearers of the Olympic flag at the opening ceremony of the 2000 Sydney Olympics.