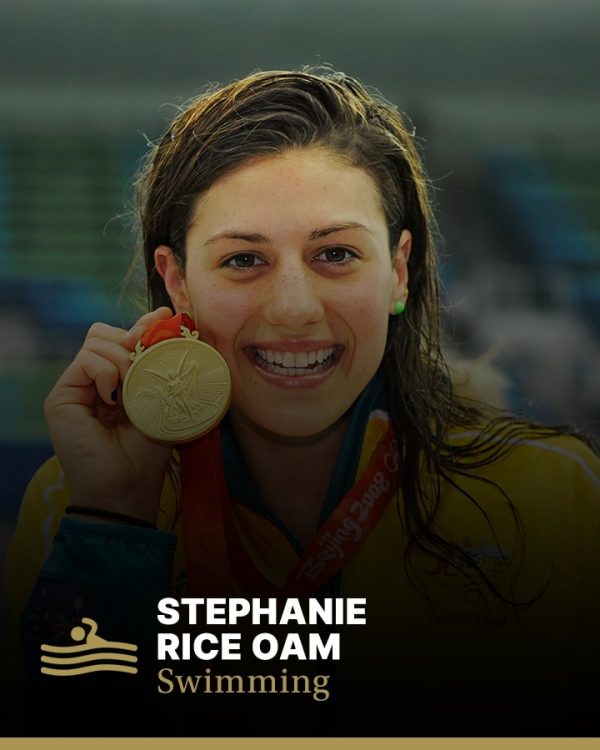 Stephanie Rice OAM was inducted into the Sport Australia Hall of Fame in 2019 as an Athlete Member for her contribution to the sport of swimming.

Rice was dominant of the individual medley swimming events in such a short period of history claiming three Olympic gold medals, two Commonwealth golds, and two silver and five bronze medals from world championships, setting world records in all her swims at the 2008 Olympics.

It wasn’t until Rice was 14 that the signs of what was to come appeared when she won six gold medals at the age nationals. The following year qualified for the Junior Pan-Pacific Championships in 2002 where she won two gold medals. From that point on, Rice made winning national age titles a habit across a range of butterfly, backstroke and medley events.

She made her senior international debut at the Melbourne 2006 Commonwealth Games, where she foreshadowed what was to come by winning the 200m and 400m IMs.

The next year, at the World Championships, also in front of a home crowd in Melbourne, she won bronze medals in both IMs, lowering the Australian record in the 400.

In March 2008 at the Olympic trials in Sydney, she unexpectedly broke the world record in the 400 IM by a full second. Three days later she broke the 200 IM world record that had stood for 11 years and qualified for the Beijing 2008 Olympic Games.

There, aged 20, she thrust herself into legendary company by winning the 200m and 400m individual medleys, breaking world records in both and becoming the first woman to swim under 4.30 in the 400 IM. She then led her little-known team-mates -Linda Mackenzie, Bronte Barratt and Kylie Palmer -to unexpected victory in the 200m freestyle relay, an event in which the United States had never been beaten. They wiped more than five seconds off the world record and left the highly fancied American and Chinese teams in their wake.

Rice’s victory in the 400m was Australia’s first in the Beijing Water Cube and the nation’s 400th medal in summer Olympic history, and her performances were largely responsible for Australia dominating the USA 6-2 in the women’s events. As Australia’s most successful competitor at the Games, she carried the flag at the closing ceremony. In the same year Swimming World magazine named her World Swimmer of the Year.

After the Olympics Rice started experiencing nagging shoulder pain while she swam, which affected her results at the 2009 World Championships in Rome where she won silvers in the 200 IM and the medley relay and bronze in the 400m.

In 2010 the pain worsened and required an operation, which was successful, but nine months before the London 2012 Olympic Games she tore a tendon in her shoulder which needed more surgery 10 weeks out from the selection trials.

Despite that, she qualified for the team and made the finals of both individual medleys where she finished an impressive fourth and sixth.