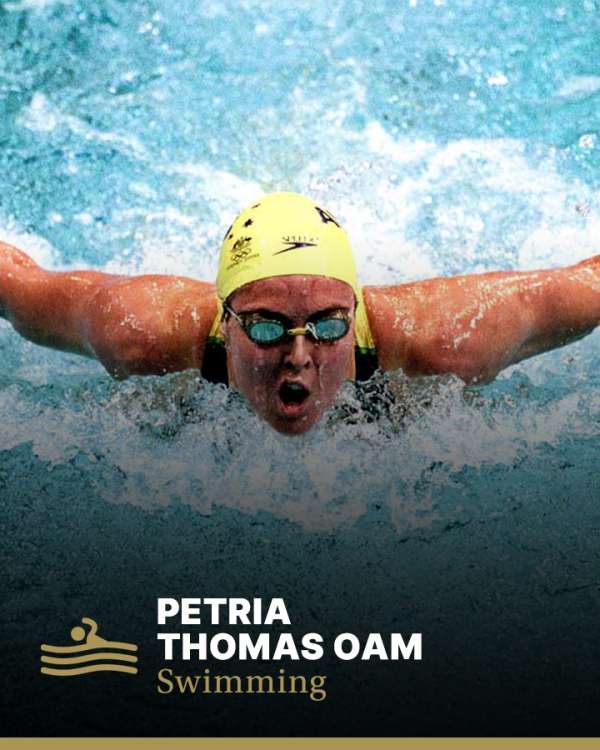 Petria Thomas OAM was inducted into the Sport Australia Hall of Fame in 2007 as an Athlete Member for her contribution to the sport of swimming.

Petria Thomas was born in Lismore, NSW and first emerged as a promising young swimmer in 1992 when she was named Country Lifesaver of the National Titles in 1992. She showed further promise and earned a scholarship to the Australian Institute of Sport and made her international swimming debut at the age of 17 at the 1993 Short Course World Championships where she won bronze in the 200m butterfly. Throughout her career and despite her obvious talent and continued success to this point, Thomas had often struggled to surpass Susie O’Neill as Australia’s number one female swimmer, and it wasn’t O’Neill’s retirement after the Sydney 2000 Olympic Games that Thomas was able to really come into her own and win the collective hearts of the Nation.

In 2001, Thomas won three gold medals at the World Championships in Fukuoka, Japan, then in 2002 at the Commonwealth Games in Manchester, claimed a massive medal haul of five gold, one silver and one bronze. The 2002 Games also saw her become the first female swimmer to win the same event at three consecutive Games – the 100m butterfly. A significant shoulder injury forced her out of competition soon afterwards, and she spent much of 2003 recovering from a reconstruction.

The 2004 Athens Olympic Games was Thomas’ final international competition, and her gold-medal-winning performances were just reward for the blood, sweat and tears she had given to her sport, and the constant battle with injuries and depression she had overcome. She won her first individual Olympic gold medal in the 100m Butterfly and backed this up with gold again in the 4x100m Freestyle and 4x100m Medley relays. Thomas won the 2004 The Don Award for her inspiring performance at the Athens Games, and she was named as Australia’s Flag Bearer at the Closing Ceremony, which capped off an illustrious twelve-year swimming career that sits comfortably among the world’s best.

Upon retirement from competitive swimming in 2004, Thomas had collected eight Olympic medals (three gold, four silver, one bronze), sixteen Long and Short Course World Championship medals (four gold, eight silver, four bronze), seven Pan Pacific Championship medals (three gold, three silver and one bronze) and twelve Commonwealth Games medals (nine gold, two silver, one bronze), and had set two Olympic and two World records. And, although she is remembered as an outstanding butterfly swimmer, with World, Commonwealth and Olympic titles in the 100m and 200m, she was also a powerful freestyle swimmer and a member of the gold-medal-winning 4x100m relay team in Athens and the silver-medal-winning 4x200m team in Sydney.

Her record alone is Hall of Fame worthy, however, it’s even more remarkable given the personal battles she had to fight along the way. She suffered bouts of deep depression that plagued her throughout her career, and endured repeated shoulder injuries which required three separate reconstructions and lengthy periods of rehabilitation, however, overcame all of these challenges to retire an outstanding and greatly admired Australian athlete.