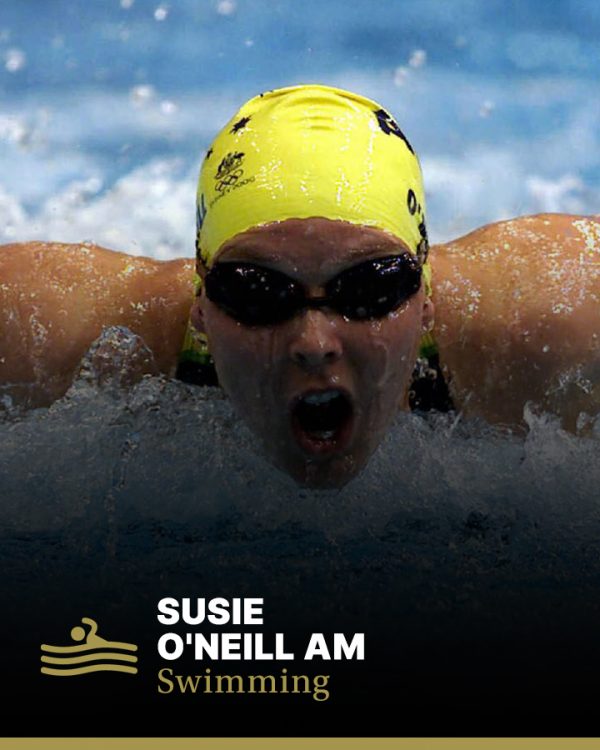 Susie O’Neill AM was inducted into the Sport Australia Hall of Fame in 2002 as an Athlete Member for her contribution to the sport of swimming and was elevated to Legend of Australian Sport in 2012.

Dubbed ‘Madame Butterfly’ for her peerless quality as a butterfly swimmer, Susie O’Neill remains one of Australia’s most successful swimmers and was a dominant influence in the pool throughout the 1990’s and early 2000’s. She first rose to prominence at the 1990 Auckland Commonwealth Games and at times, carried the hopes of our female team almost single-handedly. She never returned home from an international competition without a medal during a brilliant stretch between 1990 – 2000 and her determination to win was matched only by her modesty and respect for her fellow competitors and swimming in general.

O’Neill was born in Mackay, Queensland before her parents decided to make a move to Brisbane. As a teenager, she was educated at Lourdes Hill College and excelled as a high school swimmer – she set school records in 50m and 100m butterfly, freestyle, and backstroke – and was the school’s cross-country champion. She showed promise on the running track too and set records for the U13 800m and the U15 400m.

Despite possessing a natural running talent, O’Neill’s clear strength was swimming. She narrowly missed being selected in the Australia’s 1988 Seoul Olympic Games team, but by 1990 had qualified to represent her country at the Auckland Commonwealth Games. There, on international debut, she won gold in the 4x100m Freestyle Relay and silver in the 100m Butterfly. Then, at the 1991 Pan Pacific Championships in Edmonton she claimed a further gold and silver, as well as three bronze medals. Her international career was underway, and O’Neill was set for a decade-long reign at the top of world swimming. In 1991 she won World Long Course Championship silver in Perth and in 1992, was selected on her first Australian Olympic Team and headed to Barcelona, where she won bronze in the 200m butterfly. She continued her medal-winning stretch at the 1993 World Short Course Championships in Palma, where she claimed 100m Butterfly gold, and silver medals in the 200m Freestyle, 200m Butterfly, 4x200m Freestyle and 4x100m Medley Relay.

At the 1994 Commonwealth Games in Victoria, Canada, O’Neill was in red-hot form and swam her way to 200m Butterfly, 200m Freestyle and 4x200m Freestyle Relay gold, and 100m Butterfly and 4x100m Freestyle silver. The 1995 Pan Pacs in Atlanta was another golden meet for O’Neill as she claimed a further three gold medals, as well as two silvers.

At her second Olympic Games, in Atlanta in 1996, she won a medal of each colour, which included her first Olympic gold – in the 200m Butterfly, where she defeated Ireland’s triple winner Michelle Smith. The win meant O’Neill became the first Australian female swimmer since 1980 to win Olympic gold, and the first Australian female ever to win the 200m Butterfly. She also won silver in the 4x100m Medley Relay, and bronze in the 4x200m Freestyle Relay and became Australia’s most successful Olympian since Legend of Australian Sport, Shane Gould in Munich 1972.

In 1998, O’Neill took her swimming to the next level and put simply, dominated the Kuala Lumpur Commonwealth Games swimming program. She won a record eight medals, including six gold – 200m Butterfly, 200m Freestyle, 400m Freestyle, 4x100m Freestyle Relay, 4x100m Medley Relay and 4x200m Freestyle Relay – and two silver – 100m butterfly, 100m freestyle. The 1998 Commonwealth Games was O’Neill’s most prolific and set her up for a couple of incredible years ahead, that culminated in her home Olympic Games in Sydney in 2000. In the lead up to Sydney 2000, O’Neill won another six medals at the 1999 Pan Pacific Championships in Sydney – two gold and four silver – then, in the perfect preparation for Sydney at the Australian Swimming Trials, she broke a 19-year-old 200m Butterfly World Record, set by the great Mary T. Meagher, swimming’s first Madame Butterfly.

As the Sydney 2000 Games dawned, O’Neill was Australia’s brightest swimming star and had a decade of success to her name. She entered her final Games fresh off a new WR and as the defending 200m Butterfly Champion and hoped to add to her already significant number of international medals. She did and affirmed herself as one of Australia’s all-time greats. However, there was a twist – O’Neill won the race she didn’t expect to – the 200m Freestyle – and finished second in her per event – the 200m Butterfly – and won two relay silver medals – in the 4x100m Medley Relay and the 4x200m, Freestyle Relay. To this point she had remained unbeaten in the Butterfly across 200m, however, even though she was beaten by Team USA’s Misty Hyman in that event, she did become the first Australian woman since SAHOF’s inaugural female inductee and Legend of Australian Sport, Dawn Fraser AC MBE to win gold in successive Olympic Games, and equalled Fraser’s biggest Olympic medal aggregate. O’Neill announced her retirement from competitive swimming after the Sydney Games and was officially appointed to the IOC Athletes’ Commission. As a member of the Commission, she instilled her champion qualities into the Olympic movement until 2005 when she stepped down due to family commitments.

Throughout her career, O’Neill won a total of 67 major international medals that included eight Olympic (two gold, four silver, two bronze), 18 Long and Short Course World Championship (four gold, nine silver, five bronze), 25 Pan Pacific (seven gold, fifteen silver, three bronze), and 16 Commonwealth (eleven gold, five silver) medals. She also claimed an incredible 35 Australian Open Swimming Championships – the most by any Australian – and in her favoured event, the 200m Butterfly, broke the Australian Record on eight occasions, and the Commonwealth Record six times. Although she was more famous for swimming the butterfly, she was ranked the World Number in both Butterfly (100m and 200m) and Freestyle (200m) in 1999 and 2000.