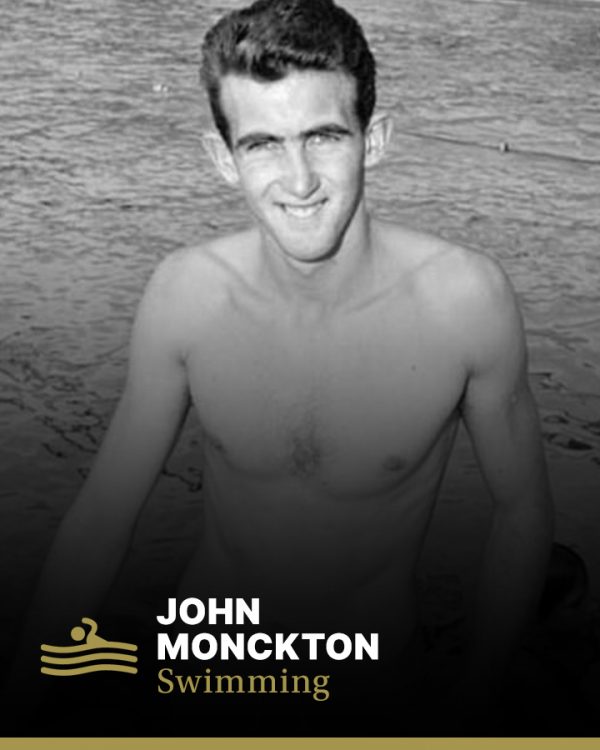 John Monckton is one of Australia’s great backstroke swimmers of the 1950s, winning silver in the 100m backstroke at the 1956 Melbourne Olympics. Although he set multiple world records, he never won an Olympic gold medal.

An apprentice carpenter from the New England region of New South Wales, Monckton appeared to be primed to win gold at the 1956 Olympics. At the national team camp in Townsville before the games, he became the first person to swim the 400m backstroke in under five minutes. Although it was not a regularly contested event at international level, it was a promising sign for the Olympics. He also set world records in the 110yds and 220yds freestyle events.

At the 1956 Games, the Australians (David Theile and Monckton) were up against some daunting international talent, in the form of world record holder Al Wiggins of the USA and the Olympic champion Yoshi Oyakawa of Japan. The Australians bettered the Olympic record in both their heats and semi-finals. In the final, Monckton won silver behind Theile with Wiggins and Oyakawa the last two finishers.

In the absence of Theile, who had retired after the Olympics to study medicine at university, Monckton dominated backstroke swimming, winning the 110yds backstroke event and the 4x110yds medley relay at the 1958 Cardiff British Empire and Commonwealth Games.

Before the 1960 Rome Games, Monckton was seen as a gold medal prospect, even though Theile was the defending champion. Monckton held the world record of 61.5 seconds, and Theile’s recent times were much slower than those of rival American’s Frank McKinney and Bob Bennett.

Monckton lead the qualifying in the heats and semi-finals. However, in the final, he misjudged the turn and broke a finger as he smashed into the wall. He limped home in seventh position, with Theile successfully defending his title. Monckton continued competing in the hope of reaching a third Olympics in 1964, but retired after his performances began to deteriorate.