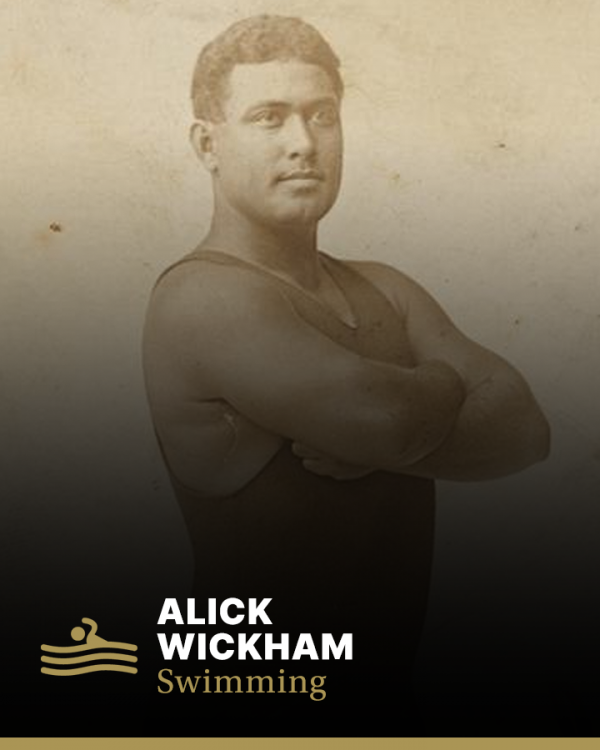 Alick Wickham was a Solomon Islander who is credited with introducing the crawl stroke to the western world. The Melanesian islanders usually came from cultures with longstanding maritime traditions and an easy familiarity with the sea. In the 1890s, Alick, from Roviana Lagoon in the Solomon Islands, was working as a ‘house-boy’ in Sydney, and swimming in the sea-baths at Bronte Beach, using a stroke that was widespread in many parts of the Pacific.

It was George Farmer, a prominent Australian coach at the turn of the century who saw Wickham and gave his stroke the name that has survived. Watching the speedy Wickham swim (he was later the national 50yds freestyle champion of Australia), Farmer shouted, “Look at that kid crawling!” From this comment came the crawl stroke label. Other swimmers quickly took up the stroke and developed it.

Arthur Freeman who often watched the young student swim said, “Wickham’s six-beat kick reminded me of an outboard motor.” It was apparently a stroke very similar to today’s crawl stroke swum head up, as in water polo. Forbes Carlile describes it as follows:

“In 1898 this boy from the British Solomon Islands arrived in Sydney – Alick Wickham – whose brother Harry wrote me several letters in 1950 when I was investigating the beginnings of the crawl stroke. These letters explained that Alick came to Australia on his father’s trading schooner, when he was seven years old, and stayed in Sydney for his schooling. Alick was keen on swimming, he played around in the water continually, and in 1898 was entered in a 66yds U10 handicap race in Australia’s oldest rock pool at Bronte, near Sydney. It was here that Alick astonished onlookers with his speed and unusual stroke. Charlie Bell, who raced against him, told me that Wickham swam with his head held fairly high, turning it quickly from side to side breathing with each complete stroke, his wooly head apparently not getting wet. The entry of his arms was short and towards the centre line of the body with the elbows well bent. His arm action was very fast and short. Each arm performed a symmetrical action with the head turning from side to side as if breathing on each side, but only breathing on one side to each stroke.”

Twenty years later the colorful Alick Wickham broke another world record, this one in Melbourne, a world record which still stands. Wickham made a perfect swan dive from a height of 205ft, 9in.

He also played a role in the development of body surfing, as he was one of a group of powerful swimmers who congregated around Manly beach in Sydney and who were keen to foster skills and techniques in the early days of surfing. Certainly, it would be a lot harder to catch waves using strokes other than the ‘Australian crawl’.