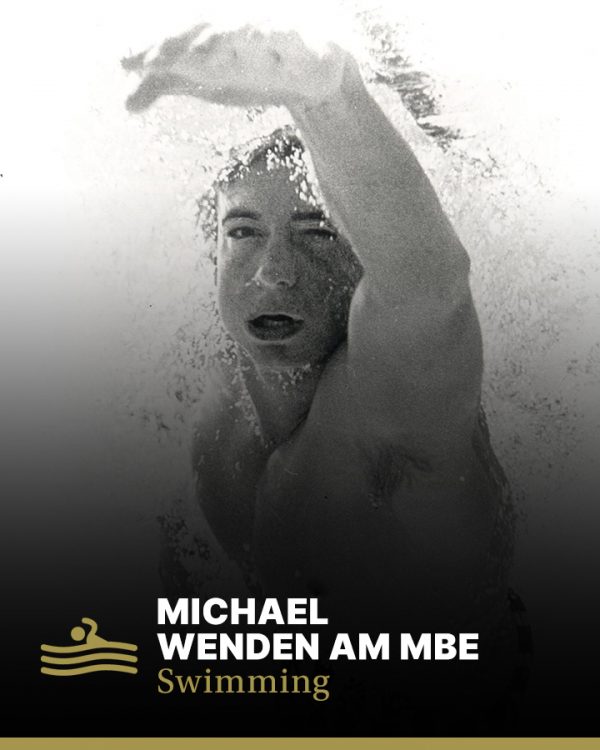 Michael Wenden AM MBE was inducted into the Sport Australia Hall of Fame in 1985 as an Athlete Member for his contribution to the sport of swimming.

Wenden’s 1968 Olympic haul of two individual gold medals, a silver, and a bronze was among Australia’s finest at a single Olympics, the best since the 1956 Melbourne Games. But he did more than just win medals, he broke the 100m world record and the 200m Olympic record, and beat American superstars Mark Spitz and Don Schollander. The 200m record he broke was the longest standing in swimming history, the event had not been swum at the Games since 1904 and Freddie Lane had set the world record four years earlier in Paris.

Wenden, 18, had twelve races at the Games, and he expanded his energy in what some thought almost a profligate manner, belting out at least fifteen strokes a lap more than swimmers like Schollander and Spitz. He later described his style of 1968 as “hell for leather, getting from one end of the pool to the other as fast and furiously as possible”. Pat Besford of ‘World Sports’, put it more succinctly, “he looks like a water beetle gone made”. (After studying Schollander in 1972, Wenden modified his technique to slow down the rate of the stroke but improve its efficiency.)

Wenden turned to swimming seriously after breaking a leg (while trying to jump a paling fence) when he was 12. The injury pushed him away from contact ball sports and caused him to spend more leisure time in the water. Soon afterwards, he came under the influence coach Vic Arneil, a former army commando who took pride in his unconventional training methods. Arneil set Wenden pure sprint programs unlike other coaches of the time, including Don Talbot and Forbes Carlile, who were devoted to the principle of speed through endurance. His slogan was, “there’s only one way to swim fast, and that’s to swim bloody fast”.

The landmarks of Wenden’s career involved big names. At 12 he swam a time faster than a world record Johnny Weissmuller had once set, at 14 he became the first of his age to swim 100m freestyle under a minute, recording 58.6 seconds. A year later, Arneil announced that he was faster than John Konrads and Murray Rose at the same age. While still a junior, he swam an Australian 100m record of 54.2 seconds.

In 1968, Wenden had trouble adjusting to Mexico City’s high altitude; for two weeks his heart pumped so fast he could not swim and hardly sleep. In his first Olympic event, the 4x100m freestyle relay, the Australian team comprising of Greg Rogers, Bob Windle, Robert Cusack and Wenden finished third to the Americans. However the fastest leg in the final was swum by Wenden, until then ranked 6th in the world.

For the 100m he backed himself with $20 at 3-1 with a journalist running a book on the race. The favourites were the Americans Ken Walsh, Zac Zorn, and Mark Spitz. Before the final, Windle alerted Wenden to Zorn’s habit of exploding from the start but fading in the second lap. Wenden caught up and overtook Zorn at the 70m mark and drove to the wall to win in record time of 52.2 seconds from Walsh, the world record holder, and Spitz.

The Australian 4x200m squad of Greg Rogers, Graham White, Bob Windle and Wenden won silver behind the US.

After a full days break, Wenden clashed with Schollander in the 200m freestyle. Schollander, the consummate technician, had won four gold medals in Tokyo and Wenden did not back himself. Wenden won in Olympic record time of 1:55.2 seconds from Schollander and John Nelson (USA), becoming the first man to beat Schollander in the 200m freestyle in more than five years. At the end of the race, completely exhausted, Wenden lost consciousness and sank to the bottom of the pool, only saved by Windle who had inadvertently dislodged him from the ropes with a congratulatory pat on the head. Wenden later saw Schollander on the floor receiving oxygen.

After performing well below his best at the 1972 Munich Games, he remained dominant in the British Commonwealth Games, winning four gold medals in 1970 in Edinburgh, the 100m and 200m freestyle, 4x100m and 4x200m freestyle relays, and one silver in the 4x100m medley relay.

In 2000 Wenden was one of the eight flag-bearers of the Olympic flag at the opening ceremony of the 2000 Sydney Olympics.