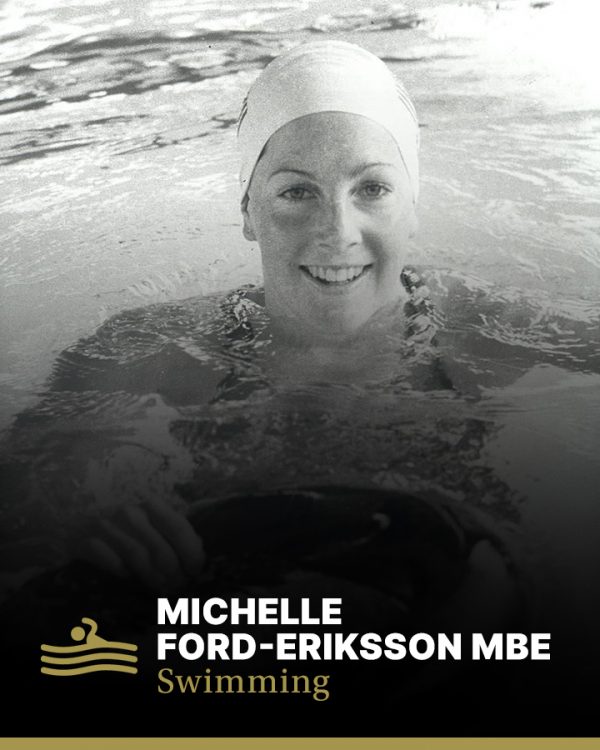 Michelle Ford-Eriksson MBE was inducted into the Sport Australia Hall of Fame in 1985 as an Athlete Member for her contribution to the sport of swimming.

Ford-Eriksson (nee Ford) was Australia’s lone individual gold medalist at the 1980 Moscow Olympic – where the Australian won just two – as she claimed the top step on the podium in the 800m freestyle. The 4x100m medley team of Neil Brooks, Peter Evans, Mark Kerry, and Mark Tonelli won Australia’s second gold.

Ford, who turned 18 on the eve of the 1980 Games, was not only the sole Australian to win an individual gold medal in Moscow, she was one of only two swimmers (with the Russian Lina Kachushite, in the 200m backstroke) to prevent a clean sweep of gold by the East German women, then exploring new frontiers of sport engineering and development. So emphatic was the impact of the East Germans (led by Ines Diers with eight medals) that they finished with 24 individual medals of a possible 33, they also won both relays. All of this made Ford’s performance quite memorable as she left two of them, including Diers, trailing in her wake in the 800m final.

The big chance in her life came after a period of intense dueling between Olympics with Tracey Wickham. Both girls had gone to the 1976 Montreal Games, but for them it had been largely an exercise in gaining experience. Ford, the youngest member of the team at 13 (she turned 14 during the games), reached the semi-finals of the 200m freestyle and the 200m butterfly. Wickham, 14, failed to progress beyond the heats in the 400m and 800m freestyle events.

Ford began breaking world records late in 1977, setting a new mark over 800m and then breaking it 16 days later in 1978 with 8 min 30.53 seconds. Then Wickham’s challenge began, and the pair had a couple of magnificent battles at the 1978 Edmonton Commonwealth Games. In the 800m, both were inside the world record, with Wickham winning in 8:24.62 seconds. They finished one-two in the same order in the 400m (Ford also won gold in the 200m butterfly creating a new Commonwealth record, and bronze in the 200m freestyle). She concentrated on studying for her leaving certificate before the 1979 national titles, and Wickham went on to win the 200m, 400m, 800m and 1500m championships. Later that year, in August, Ford went to Moscow for the Spartakiade Games and won gold in the 400m and 800m freestyle, and the 200m butterfly.

As soon as she finished school at St George High in Sydney, Ford flew to the United States to train under Don Talbot, then coaching in Nashville, Tennessee. After eight months there, competing in a number of carnivals against the best American swimmers, she returned to Australia for the 1980 national titles to break the Wickham freestyle dominance. She won the 800m and 1500m championship and Wickham retained her titles over 200m and 400m. Then Ford returned to Nashville, training amid the uncomfortable boycott atmosphere that prevailed in the United States. After the AOF voted for Australia to attend the Olympics, Ford returned home to train with the Australian team.

In Moscow, the East German girls worked to a pattern: one would lead out fast, and another would kill off the field with a withering finish. When she finished third in the final of the 200m butterfly final, behind East Germany’s Ines Geissler and Sybille Shonrock, it was the first time Australia’s flag had been raised at the Games (in the opening ceremony, Australia had marched behind the Olympic banner rather than the Australian flag). In the 400m final, Ford again swam creditably to finish fourth, edged out by what the Australian official report described as a cleaver team race by the East Germans.

Before the last freestyle event of the Games, the 800m final, she talked to team coach Bill Sweetenham, and decided not to allow the East Germans to dictate any terms. The plan was to go out easily but steadily for the first 200m, then push the pace hard. She did just that, stroking to the lead by the end of the fifth lap. As she sprinted down to the last lap, the challenge never came, finishing in a time of 8:28.9 seconds. The consistent Diers was second, and Heike Dahne third.

Ford took a break from swimming after the 1980 games, and entered the University of South California to continue her studies for her Bachelor of Arts Degree. Returning to the pool for the 1982 Brisbane Commonwealth Games, she won gold in the 200m butterfly, and silver in the 800m freestyle.

She was a controversial omission from the Australian team for the 1984 Los Angeles Olympics, and returned to the United States to complete her Masters Degree in Sports Psychology at the University of Southern California.

She has since worked as a Director of Sports at the University and Polytechnic College of Lausanne (Switzerland). Ford returned to Sydney to work with the Organising Committee for the 2000 Olympic Games as Regional Manager for the Oceania Region, which included Australia. She is currently a Board Member of the Australian Sports Commission, and works as a consultant to the sporting community.

1982: Made a Member of the British Empire (MBE) for servicing to swimming
1985: Selected on the inaugural IOC Athletes’ Commission