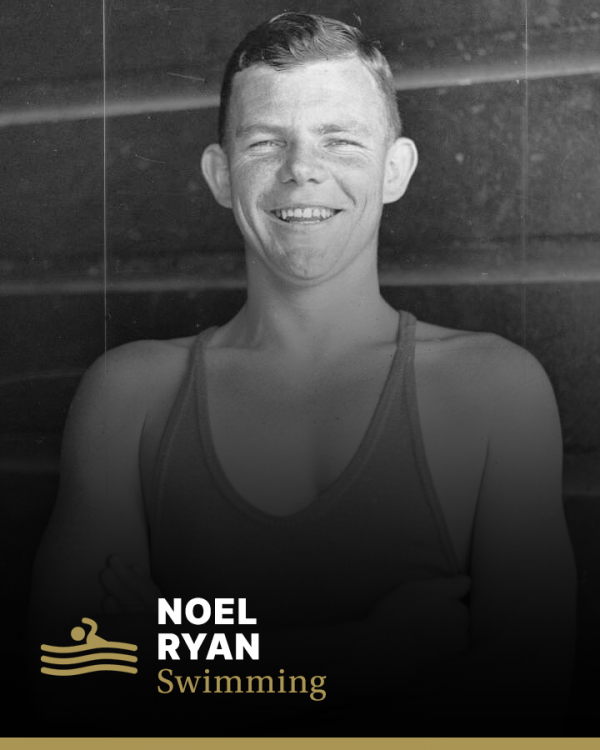 Noel ‘Tiger’ Ryan was one of Australia’s greatest surf and still water swimmers. He represented Australia at the 1932 Los Angeles Olympic Games and the 1930 and 1934 British Empire Games.

At the 1932 Los Angeles Olympics, he did not progress past the semi-finals in the 400m but did well to finish fourth in the 1500m final, his time of 19min 45.1secs then being the fastest by an Australian.

At the 1930 inaugural British Empire Games in Hamilton, Canada, Noel won gold in the 400yds and 1500yds freestyle events, and repeated the double in London in 1934, where he was also the Australian flag bearer.

Like many of the early swimmers he did not subscribe to the long distance training practiced by our modern competitors. He and others were warned that too much swimming could wreck their hearts. Noel sufficed with 1600m a day.

In the surf, Ryan gained his SLSA Bronze Medallion on December 27, 1927, and two hours later won his first junior surf race in Manly.

After winning his first Australian junior surf race in 1928, Ryan’s surf career blossomed. From the Manly Surf Life Saving Club he made surfing history in the 1929/30 Australian championships at the age of 18 he won the junior and senior surf titles and was first to finish in the surf teams championships won by Manly.

In 1958 at the age of 47, Ryan swam third against the best of Australia’s surfers at the Queen Mother’s Carnival (an open surf race in honour of the Queen Mother) at North Steyne and according to a report at the time, “he was not puffing at the finish, while men half his age fell exhausted on the sand”.

Ryan, who toured with surf teams to New Zealand and South Africa, won a marathon race at Manly Baths when he was 49 and in 1965 he was second to the champion of the day, Max Riddington in a Veterans surf race and again second to Riddington in 1969 in a similar event. He won the 50m still water titles at Manly when he was 50.

In private life, Noel was a bank manager for the Commonwealth Banking Corporation and in his later years devoted much of his spare time to fostering talented young swimmers.

He was competing in his favourite sport when he died. He collapsed after finishing second in an 880yds race at Manly pool on November 23, 1969, at the age of 59.