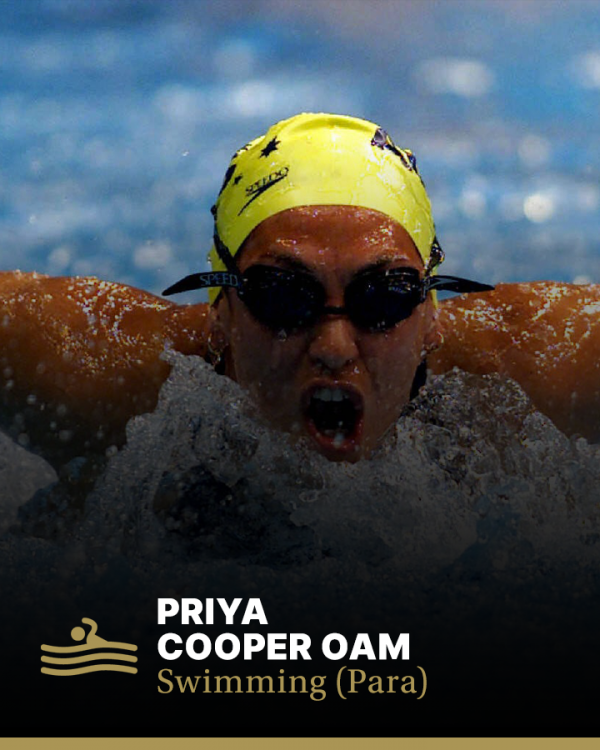 Priya Cooper OAM was inducted into the Sport Australia Hall of Fame in 2015 as an Athlete Member for her contribution to the sport of swimming.

Cooper competed at three Paralympic Games in the S8 category, winning a total of nine gold medals, three silver and four bronze and setting five world records. Over her career she has held world records from 50-800 Freestyle, 100,200 backstroke and 200 Individual Medley both short and long course.

In Barcelona in 1992 she claimed three gold, two silver and two world records; in Atlanta in 1996 she improved that to five gold, one silver, one bronze and three records and in Sydney 2000, despite having just recovered from major surgery for a shoulder injury, it was one gold and three bronze. She also won three golds with two records at the Paralympic swimming world championships in Christchurch in 1998 and four golds, a bronze and another world record at the British national titles the same year.

Cooper, who used a wheelchair for most of the time when on dry land, was a versatile performer in the water, competing successfully in freestyle, backstroke and butterfly, sometimes altogether in medley races, with a style that relied on upper body strength with her legs trailing behind.

Born with Cerebral Palsy she was encouraged by her parents to take up swimming as therapy when she was very young, Cooper started by competing in school carnivals and made her first appearance in a national team when she was in Year 12, after winning 12 gold medals at national events.

She represented WA at the 1991 National Wheelchair Games, winning nine gold medals, which led to her selection for her first Paralympic Games the following year.

In 1993 she was awarded an OAM (Medal of the Order of Australia) for her services to sport as a gold medallist at the 1992 Paralympic Games in Barcelona and in 2000 awarded the Australian Sports Medal. After her international competitive career was over, she became a commentator at the 2002 Commonwealth Games and worked in sport and recreation for people with disabilities giving her support as a fundraiser for several charities as well as becoming a dynamic public speaker