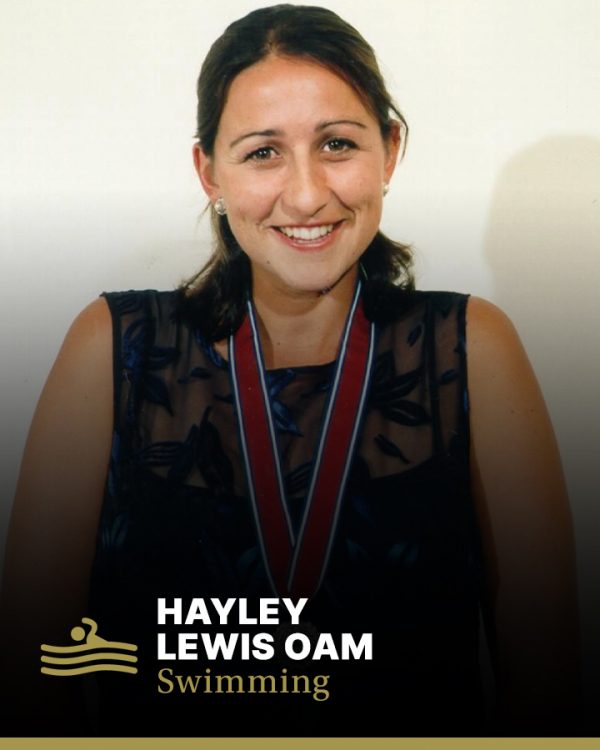 The ‘Golden Girl’ of the 1990 Commonwealth Games, held in Auckland, Hayley Lewis swept home with five gold medals. Then aged just 16, the young Queenslander had been preparing for swimming success most of her life. She began ‘making waves’ at the age of 10, when she swam the fastest ever junior time recorded in the 100m freestyle – 1 minute 4 seconds. With this background, Lewis qualified for the 1988 Seoul Olympics at the age of 14, but was considered too young to take part.

Auckland 1990 was therefore her launch pad onto the international swimming scene. The teenager became an instant favourite, dominating the Games. She won the 200m, 400m, 400m individual medley, 200m butterfly and the 4x200m relay. She continued to dominate women’s swimming, winning gold at the 1991 World Swimming Championships in Perth in the 200m freestyle, silver in the 400m individual medley, 400m and 800m freestyle events, and bronze in the 200m butterfly.

Lewis represented Australia at the 1992 Barcelona Olympic Games, coming home with a silver medal for her favoured 800m freestyle, and a bronze for the 400m freestyle.

Lewis also represented Australia at the 1996 Atlanta Olympics, and qualified for the 2000 Sydney Olympics, before taking to open water swimming. Lewis competed in the World Swimming Championships in Japan in July 2001 in three events – the 1500m freestyle in the pool, and the open water 5km and 10km events, winning bronze in the 5km event.

Because open water swimming was not going to be included in the 2004 Athens Olympics, Lewis decided to retire, however, she remains the current Australian 5km and 10km open water champion.

She was awarded a Medal of the Order of Australia (OAM) in 2003, for her services to swimming, both as a competitor and within the community.