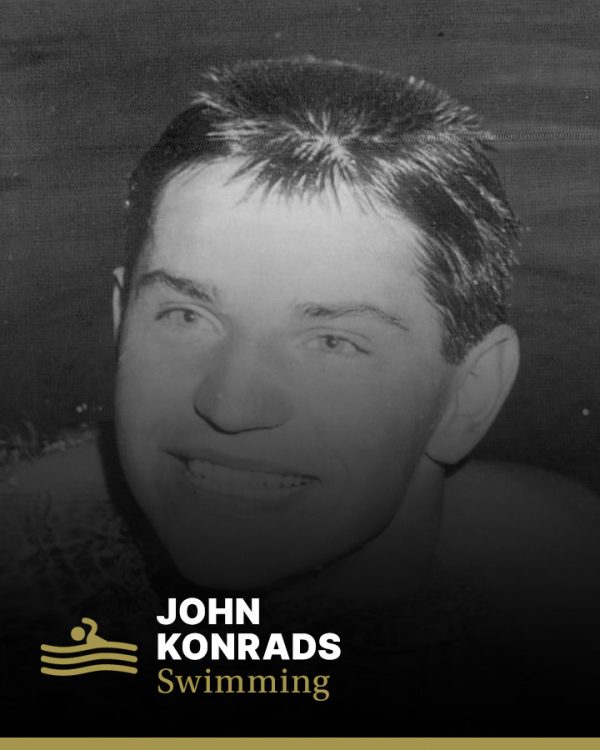 With his sister, Ilsa, John Konrads dominated the Australian swimming scene for a brief but brilliant time in the late 1950s and early 1960s. Both went on to represent Australia at the Olympic Games, John winning gold in the 1500m freestyle at the 1960 Rome Olympics.

Born in Riga, Latvia, John emigrated with his parents Janis and Elza, grandmother, and sisters Eve and Ilsa in August 1944, initially to Germany. This came after Latvia’s occupation by German troops during the Second World War and then re-occupation by Soviet troops. Living in Germany until 1949, their application to immigrate to the United States was refused on account of the large size of the family. They were relocated to a camp at Uranquinty, which was previously a base for the Royal Australian Air Force, in rural western New South Wales. There the early efforts of their father in teaching his children to swim to ensure their safety around the many watering holes and dams in the camp, and for the purposes of John’s therapy after suffering polio, were built upon by coach Don Talbot, a teacher at the primary school they attended, and assistant coach to Frank Guthrie at the Bankstown Swimming Pool.

Every day, John and Ilsa cycled to the Bankstown pool before sunrise, for a two-hour training session, before returning home for breakfast and then attending school. After school, they would cycle back to the pool and repeat the training regimen.

With this training standing him in good stead, John was just 14 when selected as a reserve for the squad at the 1956 Melbourne Games. This was the beginning of a hectic two-year period for the ‘Konrads Kids’, who between them, broke 37 world records under the guidance of Talbot. John competed in Rome four years later and in Tokyo in 1964. Like Ilsa, he suffered badly from nerves in international competition, which acted in some ways as a spur to further effort.

Konrads’ Olympic medal tally was one gold and two bronze, all of them won in Rome. When Konrads prepared for these Games, he held eight world records – from 200m to 1650yds. In 1959 he won every Australian freestyle title, in 1958 won the Japanese and French National Championships in 400m and 1500m, and later held the American NCAA titles for 500yds and 1650yds in 1963.

But it was the early days that held the sporting world in thrall. John and Ilsa were at their record breaking best in 1958, the year of the Cardiff Empire and Commonwealth Games. John won three gold medals – the 440yds, 1650yds and the 4x220yds relay. This came after the pair dominated the national championships in January that year. Thirteen year-old Ilsa had already broken two world records before 15 year-old John set the same 800m and half mile records for men two days later, then followed with 200m, furlough, 400m and quarter mile records during the next week.

After retirement, Konrads entered the world of swim coaching, before becoming the Australasian director of cosmetics giant L’Oreal. He assisted with the bid for the 2000 Sydney Olympics, and was a company director operating the Cook and Phillip Park Aquatic & Fitness Centre, as well as consulting in Human Resources.