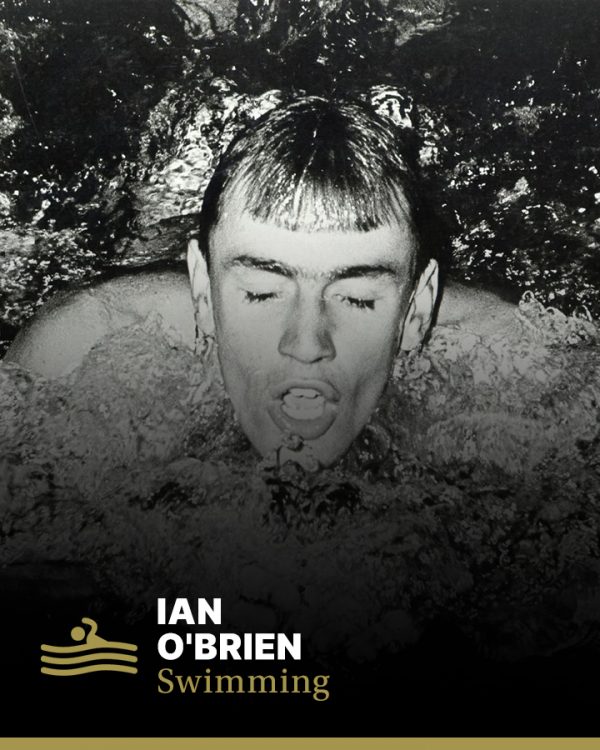 Ian O’Brien was inducted into the Sport Australia Hall of Fame in 1986 as an Athlete Member for his contribution to the sport of swimming.

A schoolboy swimming sensation, O’Brien had his first taste of international competition at the age of 15. A protégé of the young coach and former breaststroke champion Terry Gathercole, he was chosen for the 1962 Perth British Empire and Commonwealth Games after having won the national 220yds breaststroke title in 1962. There he won three gold medals, in the 110yds breaststroke, 220yds breaststroke, and the 4x110yds medley relay.

In 1963, after winning the Australian breaststroke titles over 100m and 200m, he went on an extensive international tour in company with Kevin Berry, Robert Windle, and David Dickson. Afterwards he worked with Don Talbot and Gathercole to prepare himself for the clash at the 1964 Tokyo Olympics with the two Olympic favourites, Chet Jastremski (USA), who held the world record, and Georgy Prokopenko (USSR). Gathercole concentrated on technique, Talbot on conditioning.

The heavy conditioning process proved a good investment with the heats, semis and finals all on one day. During practice he came within two seconds of the world record for the 200m breaststroke. Barely 17, he won his heat and then his semi, clipping Olympic records each time. In the final, Jastremski went out hard from the start to take the lead, as O’Brien expected. O’Brien tried to swim an even pace, and by 150m he had hauled back the American. Five metres from the finish he caught Prokopenko to win in world record time of 2 min 27.8 seconds. The record stood for four years, a long time in that era. The Russian was second and Jastremski third. He also won bronze as a member of Australia’s 4x100m medley relay team.

After the Tokyo Olympics, O’Brien quit school to concentrate on swimming, and he won three more gold medals at the 1966 Kingston (Jamaica) British Commonwealth Games. In what was to be his greatest showing, six weeks before the Games he was out of shape and 30 pounds overweight. O’Brien decided to have a go at it. He not only ‘had a go at it’ but won the 110yds and 220yds breaststroke, the latter in 2:28.0 (which translates to 2:27.0 for 200m or two tenths better than his Olympic and world record in Tokyo two years before.)

He again represented Australia at the ‘high altitude’ 1968 Mexico City Olympic Games and reached two finals, but was unable to reproduce his best form. He finished sixth in the 100m breaststroke final and was a member of the medley team that finished fourth.