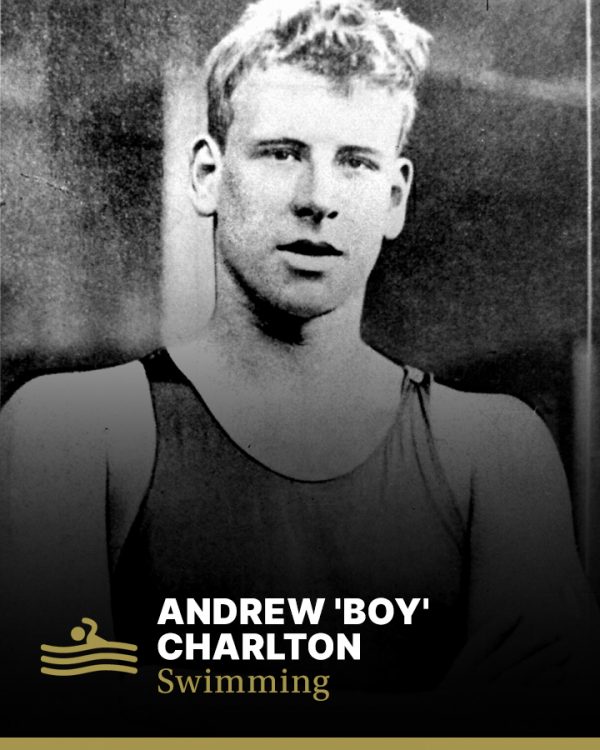 Andrew Charlton developed into the nation’s most idolised sportsman, the greatest of a procession of swimming champions, including Freddie Lane, the Cavills, Barney Kieran, Alick Wickham, Cecil Healy, and Frank Beaurepaire.

Inevitably, because of his extreme youth, they called him ‘Boy’. Born into a middle class family, it was in the summer of 1922/23 that Charlton charged into the company of champions, swimming 19 seconds inside the world record to win the state half mile senior title, at the age of 15. An unusual, quite natural feature of his stroke was his stronger right arm pull, which gave him a few inches greater propulsion through the water than the left.

At the beginning of the 1923/24 season, Charlton was matched against the mighty Frank Beaurepaire, who had swum in his first Olympics when Charlton was less than a year old. At 32, Beaurepaire was exactly twice Charlton’s age. They swam a 440yds freestyle match race at Manly Baths, and Charlton confirmed his stature by downing the older man by two yards.

The first match between Borg and Charlton would have to rank, in terms of public interest, up there with any of the great contests in the nation’s sporting history. More than 7000 people jammed into the Domain Baths -many of them jostled from the boardwalk into the water -and thousands more were turned away. A ferry moored outside the tidal baths listed dangerously as the hundreds of spectators it carried crowded to one side, even the branches of the Morton Bay fig trees served as balconies for the brave. When Charlton defeated Borg by 20yds, equalling the Swede’s world record of 5:11.8 seconds, the cheering could be heard across the parklands in the heart of the city. It intensified when Borg made the fine gesture of rowing Charlton in a dinghy the length of the pool. The pair had two more contests that summer, in the New South Wales 220yds and 880yds championships and Charlton, urged on by exultant crowds, won them both. In the half mile, he set a world record.

Charlton was an automatic choice for selectors for the 1924 Paris Olympics. On the way to the Games in Paris, Charlton’s coach, Tom Adrian, suffered a nervous breakdown and threw himself off the ship. He was fished out safely but many feared that Charlton’s performances would be affected by the experience. This was not the case.

Charlton’s first event was the 1500m freestyle, divided into heats, semi’s and the final, even though there were only 19 entrants. Charlton, who turned 17 on the eve of his heat celebrated with a short lived world record, which was bettered in the following heat by his Swedish rival Borg. The Australian, a little apprehensive about swimming for the first time in marked lanes, found they actually helped correct his stronger right arm tendency to veer a little. Borg and Charlton drew the same semi-final and swam easily with the air of men who were saving themselves for a final showdown. More than 10,000 spectators crammed into the gallery for the five man final. Borg was the early leader, three metres ahead of Charlton at 100m, the Swede leading until the 300m mark. From there, Charlton forged ahead, and at the 1200m mark, was a lap or more ahead of all except Borg. Charlton summoned a sprint for the finish to win by 40m from Borg in world record time of 20:6.6 seconds. Fellow Australian Beaurepaire placed third.

In the 400m final, Charlton was pitted against Borg and his twin brother Ake, and American Johnny Weissmuller. No more than 1.5m separated Weissmuller and Borg throughout the final, with Charlton just behind. ‘Boy’ was four yards behind with 150m to go when he went all out. The final 50m proved a big struggle, and experts afterwards expressed the opinion that had Charlton made his spurt a little earlier he would have won. Weissmuller won with Borg finishing second and Charlton third.

Because of the grueling six race passage through the 400m and the 1500m races, Charlton did not swim for Australia in the team relay until the final. The American team won the final easily in world record time, with Australia second and Sweden third.

After Paris, Charlton headed home to finish his agriculture degree and forge a career in farming. Out on the farm, there was little opportunity for swim training and he literally disappeared from the scene between Olympic Games. For ‘Boy’, very shy and just 17 years old, life could never be the same. The Paris Olympics conferred on him a folk hero status, of the rare kind that would later come to other athletes such as Don Bradman and Dawn Fraser.

Four years later in Amsterdam 1928, Borg was ready for Charlton and won the 1500m. In the 400m freestyle these two were so intent on their personal duel they allowed the Argentine Alberto Zorilla to sneak by to beat them both.

Shortly after his return from Amsterdam with two silver medals, Andrew Charlton contracted rheumatic fever which kept him semi-invalid for nearly a year and meant virtual retirement from swimming. But when the 1932 Olympics in Los Angeles came around, a completely recovered Charlton decided on a comeback and again beat the best in Australia. However, in Los Angeles a series of heavy colds plagued Charlton and doctors warned of a possible recurrence of rheumatic fever. Consequently, he swam much below form and failed to medal in either of his best races, the 400m and 1500m freestyle.

Andrew ‘Boy’ Charlton was inducted into the International Swimming Hall of Fame in 1972.