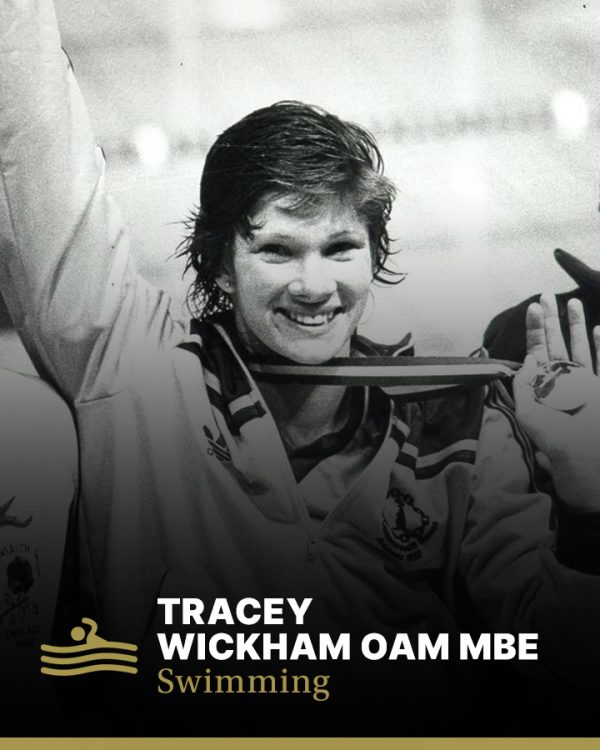 Tracey Wickham OAM MBE was inducted into the Sport Australia Hall of Fame in 1985 as an Athlete Member for her contribution to the sport of swimming.

Wickham remains, probably, the greatest Australian swimmer to never win an Olympic medal. The tragedy for Wickham is that she peaked in non-Olympic years, 1978, and 1982. Her 800m and 400m freestyle world records set in 1978 stood for 9 and 10 years respectively. When her records were broken by Janet Evans of the USA, they were the longest standing records in swimming at the time.

Tracey began swimming at eight years of age and broke her first state age group record in the 200m backstroke two years later. Her first national gold medal came in the 200m individual medley at age 12, but it was the middle and distance freestyles which were to be Tracey’s strongest events. By 13, she was the youngest Australian athlete at the 1976 Olympics, and though she gained invaluable experience, she did not make a final.

In 1978 at the Edmonton Commonwealth Games, Tracey won the 400m and 800m freestyle events, each time beating teammate Michelle Ford into second. In the 800m, both girls were inside the world record and Tracey took six seconds off Ford’s world record to win in 8 min 24.62 seconds.

Next came the Berlin World Championships and another record in the 400m freestyle, which held for nine and a half years. She also went on to win the 800m freestyle a few days later, to be Australia’s only gold medalist at the championships. Six months later at the Australian championships in Perth she lowered the 1500m freestyle world record by 8.2 seconds to 16:06.63. She also won the 200m, 400m, and 800m titles.

Tracey was selected for the 1980 Olympic team as Australia had decided not to officially boycott but decided to withdraw due to family and health reasons.

Tracey retired during 1980, but came back eight months later to win gold in the 100m butterfly and 200m freestyle at the Australian national championships.

Her coach, Laurie Lawrence, was her inspiration to start training for the 1982 Commonwealth Games in her hometown of Brisbane and with only a few months of serious preparation, everything went to plan. She repeated her 400m and 800m freestyle victories from four years earlier and won silver in the 200m freestyle. Tracey took the athletes oath at the opening ceremony and retired for good soon after the Games.

She was made a Member of the Order of the British Empire (MBE) in 1979 for her outstanding service to swimming, becoming the youngest Australian to be awarded the MBE. In 1992 she was inducted into the International Swimming Hall of Fame at Fort Lauderdale and in 2005, she was awarded the Medal of the Order of Australia (OAM) for her service to Australian swimming and to the development of young swimmers through teaching and coaching roles.