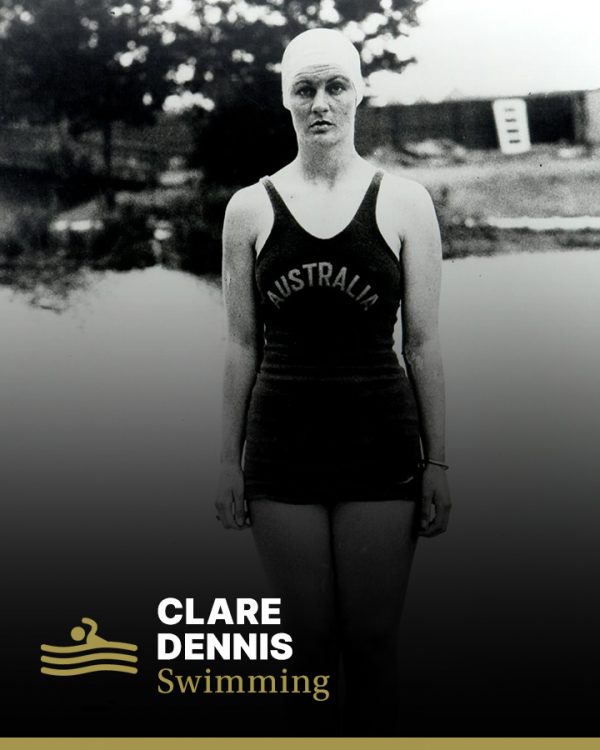 Clare Dennis was just 16 when she won Australia’s third of three gold medals at the 1932 Los Angeles Olympic Games, thus becoming the nation’s first female Olympic champion since Fanny Durack in 1912. Clare was the youngest female winner at the LA Games and the youngest Australian to win Olympic gold until Shane Gould in 1972. She was Australia’s only Olympic swimming champion from 1912 until 1956, a span of 44 years.

The medal represented the culmination of a swimming career that began at the age of seven, when she tricked her father into allowing her to join the Sydney Ladies Swimming Club. After some pestering, he told the young Clare that she could join the club only if she could swim the 30m across Clovelly Bay, Sydney. She had trouble keeping afloat around the half way mark, but found the water shallow enough to allow her to touch the bottom slyly; with a fair amount of thrashing about, she thus faked the crossing, and was rewarded with permission to join the club.

Soon, with great commitment and generous coaching, she was being fashioned into a swimmer of consequence. At thirteen she began to concentrate on breaststroke, and in the 1930 New South Wales championships she won the 220yds final, only to be disqualified for touching at the finish with one hand rather than two. She went on to win that title the following five years from 1931 until 1935.

In 1931 when she was 14, she won the NSW and national 220yds breaststroke championships, and the following year, in a swim at the Domain Baths, she bettered the world 200m breaststroke record. Her father, a police prosecutor, had died soon after her first major victories and when she was chosen for the Olympics, the family faced financial hardship. The police force helped with money, and friends made clothes to boost the lean wardrobe supplied by the Australian Olympic Federation.

The girls received no formal coaching at the Games, relying mainly on their training schedules. However, ‘Buster’ Crabbe, the US Olympic champion, gave Clare some invaluable advice. He told her to swim three strokes underwater from her starting dive and endeavour to touch ahead of the field on each of the turns.

His philosophy was simple. As breaststroke swimmers have difficulty looking to the side, the only time you get to see your opponents is when you turn. If you are ahead at all the turns, the opposition will be demoralised.

Clare received this advice after she had swum the fastest heat of the 200m breaststroke of 3:08.02 seconds, an Olympic record. But it was this heat swim that almost had her disqualified from the Games. She had worn a swimsuit, which some judges claimed did not comply with sanctioned requirements. It was suggested her silk Speedo costume gave her an advantage over the other competitors. A protest was lodged!

Australian officials argued against the protest saying the stewards prior to the race had approved her swimsuit and Clare was allowed to take her place in the final.

Lining up with Clare for the final were three Americans, Margaret Hoffman, Anne Govednik and Jane Caldwell along with Margery Hinton from Britain, Hideko Maehata of Japan and world record holder Else Jacobsen from Denmark. It was obvious to those in the know that the race would be fought out between the girls from Japan and Denmark, and the youngster from Australia.

Clare followed Crabbe’s advice to perfection. She had taken the three strokes underwater at the start and managed to touch ahead at each of the turns. She further lowered her Olympic record to 3:06.02 seconds with Hideko Maehata second and Else Jacobsen third.

She had gone to Los Angeles as a rank outsider. But in winning, and breaking the Olympic record, she became the only non-American to win a gold medal in a women’s swimming event at those Games.

She competed in one other major Games – the 1934 London British Empire Games where she won gold in the 220yds breaststroke.

She retired from competitive swimming after a foot injury prevented her from competing in the 1936 Berlin Olympics.