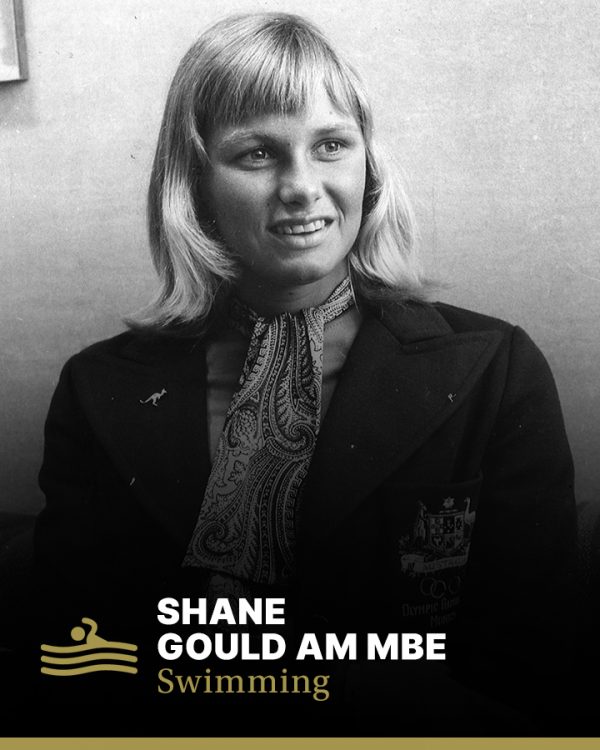 Shane Gould AM MBE was inducted into the Sport Australia Hall of Fame in 1985 as an Athlete Member for her contribution to the sport of swimming and was elevated as a Legend of Australian Sport in 1996.

Shane Gould, at the age of 15, stamped herself as one of the greatest female swimmers of her time.
Gould competed in only one Olympic Games and won more medals, five, than any female Australian Athlete had ever done. She set eleven world records before retiring at 16 years old and is still, to this day, the only swimmer in history to hold all freestyle world records, 100m, 200m, 400m, 800m, 1500m and the 200m Individual Medley at the same time.

Gould attended the Santa Clara Invitational in July 1971 where she set her third world record. This time in the 400m freestyle breaking the record set only months earlier by Karen Moras in London.

Gould began the 1972 Olympic year breaking the 100m freestyle record that she shared with Fraser at the New South Wales State Championship on January 8, 1972. This achievement meant Gould held every freestyle stroke record outright. Gould’s reputation saw the swimmers from the United States try to build their own confidence by wearing t-shirts that read “All that glitters is not Gould” a play on the phrase “All that glitters is not gold”.

At the 1972 Munich Olympic Games, Gould swam in 12 races over an eight-day period, logging 4200m of competitive swimming in the process. Gould’s first event was the 200m Individual Medley where she broke the four-year-old world record set by American Claudia Kolb. Her next race was the following day and was the 100m freestyle. She experienced her first loss at this distance in two years falling behind two Americans and finishing with a bronze medal.

At the halfway point of her Olympics campaign, Gould won the 400m freestyle and broke her own world record that she had set a year earlier. Gould claimed her third gold medal just two days later in the 200m freestyle while also reclaiming the world record by holding off a strong finishing Shirley Bavashoff. Gould closed off her Olympic campaign with a silver medal in the 800m freestyle completing her set of medals.

Just before Gould retired, at the age of 16, she lowered the world record in the 1500m freestyle at the 1973 Australian Nationals.

Gould retired from competitive swimming due to the pressure placed by her success and media. She didn’t enter a race for over two decades. In 2003, Gould made a return and showed the world she still had it. She competed in the Masters level of swimming in 2003 and set a world record in her age group in the 200m Individual Medley and Australian records for her age group across multiple distances and strokes.