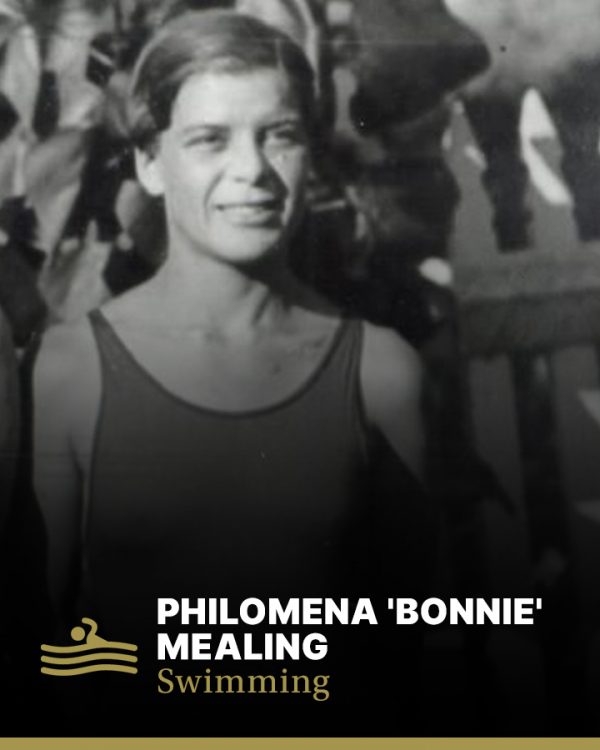 Bonnie Mealing was one of a few select Australian women swimmers who won an Olympic medal in the pre-World War II era.

Bonnie was chosen to compete at the 1928 Amsterdam Olympics. She was one of only four women to be selected in that team, the others being Edie Robinson (athletics), Edna Davy, Dorothy Thompson and Bonnie, all from swimming. At just 16 years of age, Bonnie was the baby of the team and had had less than a year’s experience in top-class swimming.

The team sailed from Sydney on the ‘RMS Naldera’ and they had more than six weeks at sea with very little opportunity to train. It is reported that Bonnie put on weight during the long sea voyage to Europe and suffered from homesickness at the Games. However she finished third in her heat of the 100m freestyle and fourth in her heat of the 100m backstroke. Following the Amsterdam Games she abandoned freestyle swimming.

Bonnie broke the world record for 100m backstroke in February 1930 with a time of 1 min 20.6 sec. This accomplishment should have earned her a spot on the team for the inaugural Empire Games held in Hamilton, Canada, that year, but what was considered as a blatant case of sexism, the selectors only chose two male swimmers to attend those Games.

By the time the 1932 Los Angeles Olympics came around, the controversial American swimmer, Eleanor Holm, had emerged as the leading backstroke swimmer in the world. Holm went on to win the 100m event in LA but Mealing took out the silver in a time of 1:21.3, one of only five medals won by Australia at those Games. The other medallists were Dunc Gray (cycling), Bobby Pearce (rowing) and Clare Dennis (swimming) who all won gold, and wrestler Eddie Scarf who won bronze.

Legendary Olympian and one of Australia’s greatest all-round sportsmen, Reginald “Snowy” Baker, writing in a leading sports paper of the day, described Mealing’s style as being the “effortless backstroke”. “Never have the critics seen a swimmer with perfect balance, cleaner leg work or more scientific arm action, both in drive and recovery.”

Mealing set another world mark, this time for the 200m distance, in 1933 but dropped out of swimming shortly afterwards. Had she continued, she would have probably been crowned the Empire champion at the 1934 London Olympics.