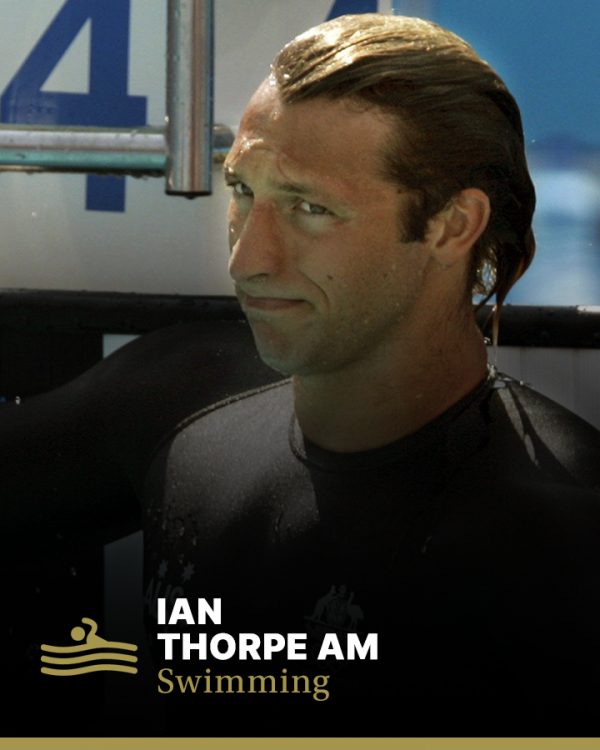 Ian Thorpe AM was inducted into the Sport Australia Hall of Fame in 2008 as an Athlete Member and elevated to Legend of Australian Sport in 2021 for his contribution to swimming.

Ian Thorpe’s achievements in the pool guaranteed him a place among Australia’s sporting greats.
Thorpe launched himself on the world stage when he became one of the youngest male swimmers to win gold at a World Championship in 1998. He went into the Sydney 2000 Olympic Games with great expectations and delivered three gold and two silver medals in front of his home crowd. Across his nine years of competitive swimming at every distance from 100m to 800m, Thorpe won five Olympic gold medals, nine Commonwealth gold, 13 World Championships and set 23 world records, making him one of Australia’s most successful athletes.

Dubbed ‘Thorpedo’, he became a drawcard, with his grace and humility endearing him to those who came to watch him live as well as the millions of fans on television as he helped to turn swimming into a prime-time sport.

Thorpe took up swimming at the age of five, following his sister Christina who had been advised to take up the sport to help strengthen a broken wrist. A chlorine allergy didn’t stop Thorpe succeeding from an early age. He began competitive swimming at the age of seven and won his first race at a school swimming carnival with his head above water.

He attended the Australian Championships in 1997 at the age of 14 years and five months. At this event, he became the youngest male selected for an Australian team, finishing third in the 400m freestyle behind Grant Hackett and setting an age-group world record with a time of 3:53.44. Thorpe raced at the 1997 Pan Pacific Championships, finishing with two silver medals for his first outing in a senior international competition.

The following year he was part of the 1998 World Championship squad competing in Perth and was a member of the gold medal-winning 4x200m freestyle relay team. This was the first time Australia had won this event at an international level since Kevin O’Halloran, John Devitt, Murray Rose and Jon Henricks famously won gold at the Melbourne 1956 Olympic Games. Thorpe made history at the same meet, becoming the youngest male to win a World Championship when he won gold in the 400m freestyle event. It was the start of his domination of this event. Later that year he attended his first Commonwealth Games in Kuala Lumpur, winning four freestyle gold medals across the 200m, 400m, 4x100m and the 4x200m distances.

Thorpe set his first individual World Record in the 400m freestyle final of the 1999 Pan Pacific championships in Sydney, breaking the record set by Kieren Perkins in 1994. He finished the competition with three more gold medals in the 200m, 4x100m and 4x200m freestyle events, breaking the 200m freestyle world record set earlier that year by Grant Hackett. It was the first world record set in the new Sydney Olympic swimming pool, with Thorpe winning $25,000 for doing so. In a sign of the generosity he would become renowned for, he donated the prize to children’s cancer research.

Thorpe entered the Sydney Olympics amid great expectations and carrying the hopes of a nation. The 17-year-old’s first event – the 400m freestyle – resulted in his maiden Olympic gold medal as he broke his own world record set just months prior. On that same day he was a member of the world record-setting 4x100m freestyle team which famously celebrated by playing air guitars, a response to American Gary Hall Jr’s pre-race prediction that the US would smash Australia ‘like guitars’. Thorpe rounded out his Olympic debut with a gold medal in the 4x200m freestyle, demolishing the world record along the way. He also won a silver in the 200m freestyle behind Dutch swimmer Peter van den Hoogenband and a silver after swimming in the heats of the 4x100m medley relay. He was named as the flag bearer of the closing ceremony after being one of the most successful athletes at the Olympics for Australia.

Thorpe dominated in the pool at the 2001 World Championships in Fukuoka, winning six gold medals from his six events in the 200m, 400m, 800m, the 4x100m and 4x200m freestyle events and as anchor of the 4x100m medley relay. He set four more world records in each of the individual events and the 4x200m relay. The world championship was the first time since 1956 that an Australian swimming team would top a medal table at a global meet amid bold predictions that Thorpe could one day potentially match Mark Spitz’s seven Olympic gold medals.

In 2002 Thorpe continued his supremacy by competing in seven events at the 2002 Commonwealth Games in Manchester, finishing with six gold medals and a silver medal, having added the 100m backstroke to his repertoire. He continued his dominance in the 400m freestyle, winning gold in a world-record time. The 2002 Pan Pacific Championships in Yokohama was overshadowed by speculation of a potential split between Thorpe and his coach Doug Frost. He still proved a force, winning five gold medals in all freestyle events and a silver medal in the 4x100m medley relay. But immediately after the championships, Thorpe announced the relatively-unknown Tracey Menzies – an assistant to Frost – would take over as his new coach.

Thorpe’s 2003 World Championship campaign in Barcelona saw him become the first world champion to win the same event three times – when he won the 400m freestyle ahead of Hackett. He also took out the title in the 200m freestyle and was a part of the 2x200m freestyle relay team. Thorpe won a silver medal in the 200m medley event behind US swimmer Michael Phelps and a bronze in the 100m freestyle.

In the lead-up to the 2004 Athens Olympics Thorpe sensationally missed selection in the 400 metres after being disqualified in the trials due to a false start when he fell into the pool off the blocks. Teammate Craig Stephens generously withdrew from the event in Athens to allow Thorpe to take his place. In what ultimately proved to be Thorpe’s last Olympics, he responded brilliantly with a gold medal performance in the 400m freestyle before following it up with gold in the 200m freestyle, silver in the 4x200m freestyle relay and bronze in the 100m freestyle event.

He took a sabbatical from swimming after the Athens Olympics, missing the 2005 swimming calendar before qualifying for the 2006 Melbourne Commonwealth Games. However, he was forced to withdraw from the event after suffering bronchitis, which was later revealed to be glandular fever. He announced his retirement from swimming in late 2006, ahead of the selection trials for the following year’s world championships.

Thorpe made plans for a comeback in 2011 in an effort to compete at the London 2012 Olympic Games, but he fell short at the Australian Olympic trials. A shoulder injury in 2013 brought an end to his hopes of reviving his international career.

Thorpe’s work outside of the pool saw him give a voice to many social issues. He used his profile to raise awareness on numerous issues including depression and equality. His philanthropic focus saw him work to raise funds for multiple causes, including children cancer and indigenous education.