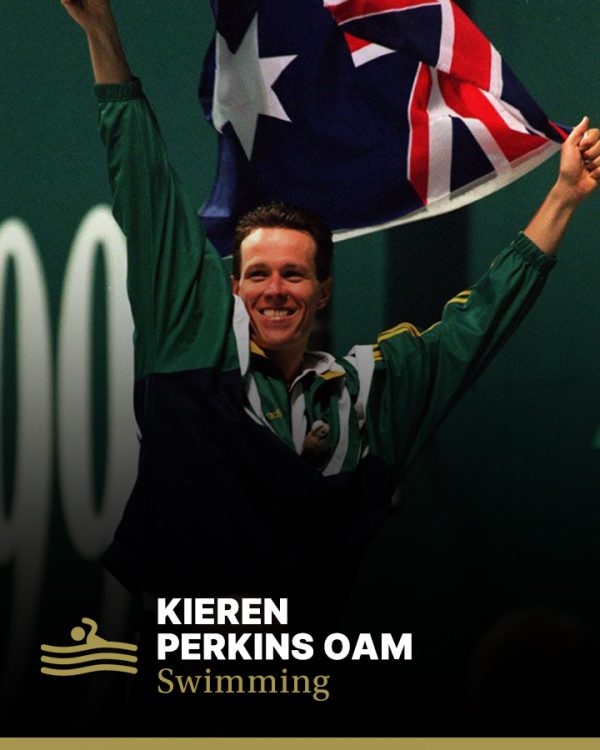 Kieren Perkins OAM was inducted into the Sport Australia Hall of Fame in 2002 as an Athlete Member for his contribution to the sport of swimming.

Nicknamed the ‘Superfish’, Perkins is one of Australia’s greatest distance swimmers. He broke 11 world records and is the first person in history to hold the Olympic, world, Commonwealth and Pan Pacific titles simultaneously. He broke over 40 Australian records during a career spanning from 1989 to 2000.

He began swimming regularly at age eight as part of his rehabilitation from a serious leg injury (after running through a plate glass window). At age 13 his potential became obvious, and with coach John Carew guiding him he first came to notice at the Australian championships of 1989. He finished 2nd in the 1500m in 15:19.94 (behind Glen Houseman who broke the world record) and made the team for the 1990 Auckland Commonwealth Games, where he swam in his first international meet, at the age of just 16. His coach predicted he would swim under 15 minutes in the 1500m. Nobody would believe it, but Perkins swam 14:58.08 to become only the 3rd person to break the 15-minute barrier. He is still the youngest person to break 15 minutes.

At the 1991 World Championships in Perth, Perkins and German Jorg Hoffman fought a fascinating dual at below world record pace. They were stroke for stroke the entire time but the more experienced Hoffman out turned Perkins and won by a few hundredths of a second in 14:50.38. It was a new world record. Perkins went 14:50.58 which was also way under the previous world record.

At the 1992 Barcelona Olympics, Perkins competed in his first Olympic final, the 400m. He swam too cautiously allowing Russian Evgeny Sadovyi to beat him by .004 of a second to take silver in 3:45.16. But in the 1500m Perkins never looked back. It was predicted this would be the big showdown between Perkins and Hoffman in a repeat of the 1991 World Championships, but in reality, it was just a display of Perkins’ superiority. He led the whole way and Hoffman finished 18 seconds behind. The crowd went crazy as Perkins swam to victory in a world record time of 14:43.48. Perkins was the Australian team flag bearer at the closing ceremony of the Games.

In 1993 Perkins broke the short course world records for the 800m and 1500m, and won three gold medals at the Pan Pacs. In 1993 Perkins was an integral member of the Australian delegation sent to Monaco to bid for the 2000 Olympics. He and the bid team were successful and Sydney went on to host the Games.

Just two weeks later Perkins went to the World Championships, and despite being unwell, won the 400m in world record time (3:43.80) treating it like a sprint event. He won the event by a larger margin that anyone else in World Championships history. Perkins battled high temperatures and nausea, but still managed to win the 1500m in 14:50, yet another world record. His 400m and 1500m world records made that year stood until 1999 and 2001 respectively, broken by fellow Australians Ian Thorpe and Grant Hackett. His performances in 1994 earned him the Male World Swimmer of the Year award from the Swimming World magazine.

His final year of preparation for the 1996 Atlanta Olympics was hampered by illness, injury, distraction, unaccountable loss of form and an understandable faltering of self-confidence. The champion who had seemed invincible, who still held world records for the 400m, 800m and 1500m freestyle, suddenly found himself battling to win a spot in the Olympic team. At the Olympic trials he failed to qualify for the 200m, then the 400m, but scraped into the 1500m behind Daniel Kowalski. For two weeks after the trials Perkins was so lethargic he could not train.

In Atlanta, Perkins continued to struggle, suffering stomach cramps that inhibited his turns, costing him 10 seconds, he squeezed into the final as slowest qualifier. If he’d been a few hundredths of a second slower he wouldn’t have made the final at all. On the final night he looked down on the pool and told himself: “I’m in lane eight. It’s the same water as the rest of the pool. I’ve just got to get in there and do it”. Written off by the media and not expected to medal, Perkins proved everyone wrong, clocking 14:56.40 to win gold by 15m. His against the odds victory to claim back to back gold medals remains one of Australia’s highest ever television ratings events.

After his Atlanta triumph, some commentators were surprised when Perkins decided to continue competing, particularly as the rise of Grant Hackett, yet another Australian distance swimmer, made it seem unlikely that Perkins could win again. Perkins had competed at the 1998 Kuala Lumpur Commonwealth Games, winning bronze in the 1500m in 15:03.00. However, the lure of Sydney 2000 was too great and Perkins competed in the 1500m, winning silver behind Hackett in a respectable 14:53.59. This made him the first person in history to win three consecutive Olympic medals in the 1500m and the 4th man in history to win two gold and one silver in the one swimming event.

In retirement, Perkins occasionally worked in the broadcast media and was named as CEO of the Australian Sports Commission in 2022.

1993: Awarded the Medal of the Order of Australia (OAM)
1994: Named Male World Swimmer of the Year by Swimming World magazine
2002: Inducted into the Sport Australia Hall of Fame