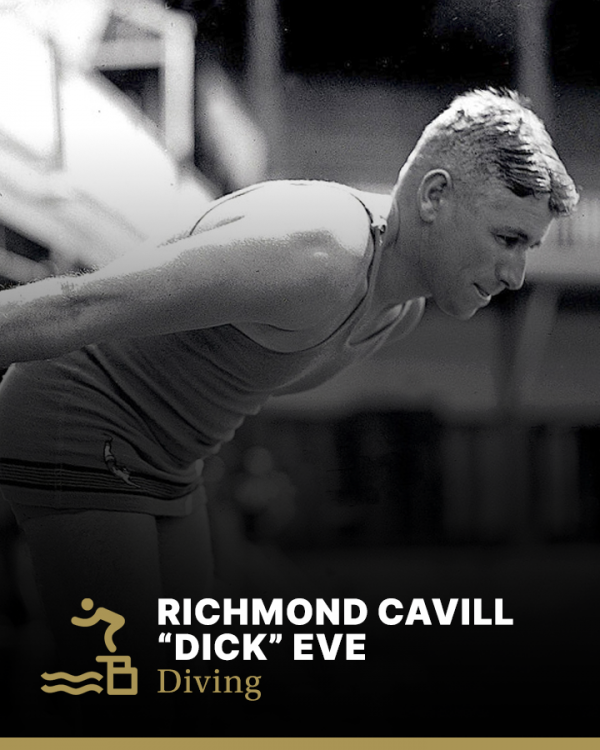 Richmond “Dick” Eve was, until 2012, the only Australian to win a gold medal in Olympic diving competition. Chantelle Newbery’s gold medal at the 2004 Athens Olympics (ahead of Loudy Tourky with the bronze) in the women’s platform was Australia’s first Olympic diving success since Eve in 1924.

Eve learnt his diving around what was virtually his backyard, the Manly Baths. He had little formal teaching, but his aquatic genes were immaculate. His mother Fredda was a member of the famous Cavill family, a clan which had a greater impact on early Australian swimming than any other. Eve’s father had been Manager of the Manly Baths and later the Spit Baths and it was at these two venues that Eve virtually taught himself the discipline of diving.

Eve and his brothers, Jim and Allan, won a variety of swimming and diving titles, and Jim went on to become honorary secretary-treasurer of the Australian Olympic Federation from 1924 to 1947. Eve, whose assets included a powerful but neat physique and a crisp grace, won Australia’s first official diving championships in 1921 and retained if for the following four years.

Eve was not very well known when he went to Paris for the 1924 Olympics, but rivals soon realised his competitiveness when they saw him perform brilliantly at an exhibition meet before the Games. He entered into three events in Paris, the springboard, the fancy highboard, and the plain highboard – which was just that, a tower event without twists or somersaults. He had been dogged by ear trouble throughout much of his career, and spent a full week in hospital before the championship at which he qualified for the Olympic team.

Eve was not expected to win a medal at the 1924 Games because of the lack of international competition in Australia. However he surprised the competing nations and won gold in the plain highboard event. Trailing going into the last dive, Eve needed a near perfect score to win gold. He did just that, performing a perfect swallow dive and scoring 13.5 points overall, defeating John Jansson (Sweden) and Harold Clarke (Britain), and making history as the first Australian to win gold in diving. Eve’s dive was flawless and the Parisians gave him a standing ovation. He also qualified for the final of the springboard, and finished fifth, but acute recurrent ear pain forced him to withdraw from the fancy highboard event.

After the Games, Eve went on to win the ‘national graceful diving championship’ at Highgate Ponds, as well as various other English tournaments and all diving events at the Irish Tailteann Games.

A year after the Olympics, he accepted a job as manager of the Manly Baths and was stripped of his amateur status by the ASUA, which deemed him to be a professional and not a government or council employee. Several attempts were made to have him reinstated, but all were resisted by the Victorian association. The loss of his amateur status prevented him from being considered for the 1928 Amsterdam Olympics.

He remained involved in aquatics for most of his life and reputedly taught future Olympian Murray Rose to swim. He was active in the lifesaving movement and figured in numerous rescues at Manly Beach. As an examiner for the Royal Life Saving Society, he devised the ‘Eve Rocker’, a resuscitation device.